The VLT Survey Telescope VST, built by a large Italy-based consortium, is a 2.6-m wide field optical survey telescope for the southern hemisphere. VST is located on the VLT platform at Cerro Paranal, Chile.It features a f/5.5 modified Ritchey-Chretien optical layout, a two lens wide-field corrector, with the dewar window acting as a third lens and an optional atmospheric dispersion compensator, an active primary mirror, a hexapod driven secondary mirror, and an alt-azimuth mounting. It operates from the u to the z band, preserving, within a corrected field of view of 1°x 1°, the excellent seeing conditions achievable at the Cerro Paranal site. The telescope is equipped with just one focal plane instrument, OmegaCAM, a large format (16k x16k pixels) CCD camera built by the international consortium of the same name.

Regular service mode observations with the VST and OmegaCAM started on October 15, 2011.

For OmegaCAM@VST, three public surveys are currently approved which have been reviewed by the "Public Survey Panel" (PSP) and recommended by the ESO Observing Programme Committee (OPC). The first observations for the public surveys, GTO and Chilean time are expected to start in the second semester of 2011. 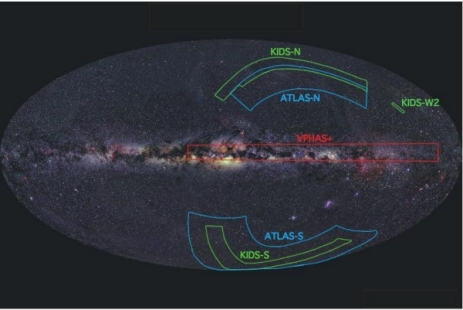 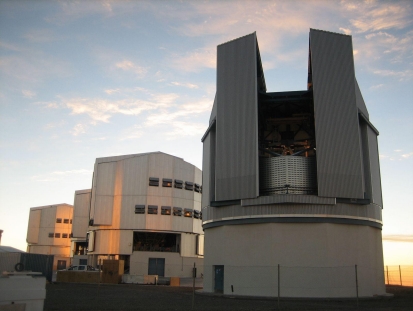 The VST on the Paranal platform