MATISSE in the VLTI context 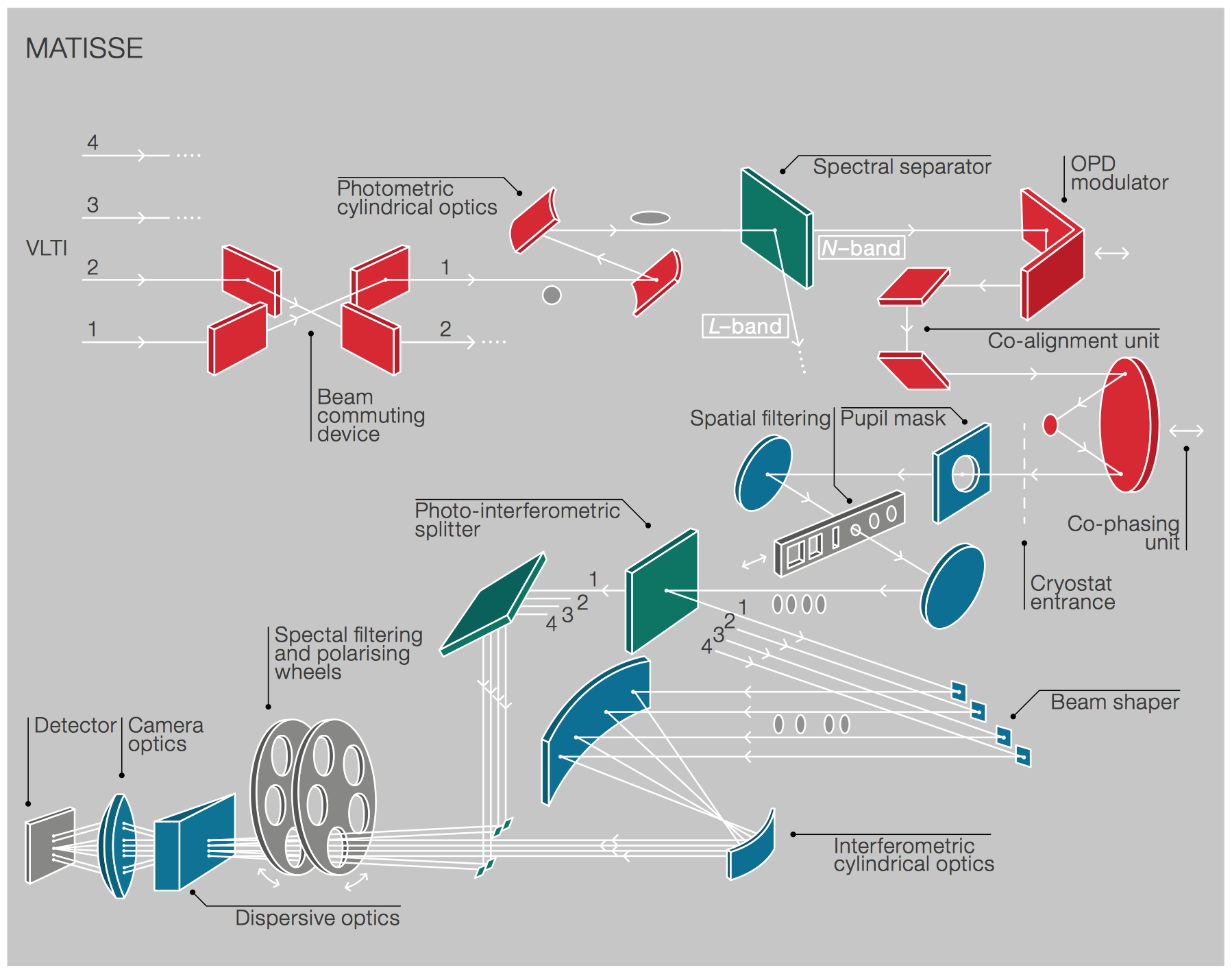 The VLTI delivers four input beams to MATISSE, from either the four ATs or the four UTs. Each beam has been stabilized with an adaptive optics system in the telescope (NAOMI or MACAO, respectively), and an the residual tip-tilt due to effects downstream from the telescope is measured in the VLTI lab by IRIS and applied through the AO system as well. Since the target acquisition is performed with IRIS, the respective limits apply. For details see the VLTI manual.

The instrument is currently largely stand-alone from the infrastructure of the VLTI. As such it does not use external fringe-tracking, and only acts as a coherencer, meaning it will only center the entire fringe package after a number of exposures, but does not keep the individual fringes in position. A coherent adding up of indivdual exposures is therefore only possible if the fringes can be centered in each exposure, or if assumptions on the fringe movements are made. The use of GRAVITY as an external fringe tracker for MATISSE is being investigated.

The CIAO adaptive optics system for the UTs is currently not offered for MATISSE.

The following is a general description of the optical path, for more detail and numerical information see the instrument manuals.

On the warm optics bench, the beams pass through two commuting devices that can interchange the input beams 1 vs. 2 and 3 vs. 4, respectively. They are always used, and any observation consists of at least one BCD-IN and one BCD-OUT measurement. Comparing the BCD-IN with the BCD-OUT data enables correction of instrument-level chromatic effects on the measured interferometric phases; the correction of similar telescope-level chromatic effects is obtained by comparing science targets to calibrators.

After the LM- and N-bands have been separated inside the warm optics part of the instrument, the beams enter the LM or N-band cryostat. The internal setup of each cryostat is comparable, so this general description is applicable to both cryostats. In an intermediate focus the beams pass through a spatial filter, either a slit or a pinhole, with defined size of the order of the point-spread function. ESO has chosen a standard setup for those, but expert users in visitor mode can make use of the alternative options.

When the photo-interferometric splitter is inserted into the beam, source photometry and fringes are observed simultaneously (SIPHOT mode), otherwise they have to be taken sequentially (HISENS mode). Currently the only offered option is to observe L-band in SIPHOT and N-band in HISENS, which is the so-called HYBRID mode.

The dispersive optics provides a choice of several resolving powers. The detector pixels oversample the optical resolution. For this reason, the pipeline enables binning from spectral pixel to spectral channels, and the performance values are given per spectral channel. This improves the performance limits without sacrificing any recorded astrophysical information. Binning any further would destroy such information. The oversampling (i.e., binning) factors are as follows:

The "pixels per DIT" are the number of pixels read in spectral direction within the default DIT values.

Filters to reduce the total background are inserted according to the chosen spectral resolution and wavelength range. The polarizing filters are not available for scientific observations.

MATISSE if offered with two observing sequences, either CAL-SCI or CAL-SCI-CAL.

Calibrator stars for N-band and L-band can be found, for instance, with the SearchCal tool provided by the JMMC or through the catalogue published by the MATISSE consortium (see links). Finding a star that is suitable for both bands at the same time can be tricky. Users should make sure already at phase 1, i.e. for proposal submission, that their chosen calibration strategy is possible and suitable calibrators are available. In case no good L+N calibrators (so called "hybrid" calibrators) are available, the user should consider to use the CAL-SCI-CAL sequence with one calibrator for L-band and one for N-band, this is even more important in case of imaging programs aiming at producing images in both L- and N-band.

The following recommendations should be considered when choosing a calibrator star:

MATISSE is offered in period 109 as stand-alone instrument on all the standard ATs configurations and on the UTs. It is also offered with GRAVITY fringe tracker (GRA4MAT mode) on the ATs, and for the first time on the UTs without chopping. The user should be aware that when using GRA4MAT with the UTs only N-band correlated fluxes are guaranteed in P109, the LM band limiting fluxes will be verified during upcoming commissioning. The limiting fluxes currently provided for LM band and GRA4MAT on the UTs are extrapolations from the ATs.

Please find below more details of the modes offered.

* The High+ mode is only available with GRA4MAT.

** During the N-band photometry exposures, LM-band data (fringes + photometry) are simultaneously recorded with chopping. We strongly reccomend to includes such observations. For details of when such exposures can be skipped, please see the User Manual.

Sensitivity and Errors vs. Observing Conditions

Starting from P105 a new atmospheric turbulence constraint replaces the current seeing constraint. The limiting magnitudes given below are listed for two turbulence regime. However, bad observing conditions do not only diminish the flux. If a science case is critically dependent to achieve the best possible error bars, it is strongly recommended to request good observing conditions regardless of the target brightness. Observations at seeing values worse than 1.2" are not recommended. All flux limits are given in Jansky and they correspond to correlated fluxes (Flux at a given band times Visibility). Details about the commissioning of MATISSE and the derivation of the instrument performances are described in Petrov et al. 2020. Small differences between the paper and the here published data are given by the fact that difference turbulence categories are used. The numbers provided below are the reference to be used for the call for proposal.

For closure and differential phase, visibility, and correlated flux measurements the following limits will allow to achieve a precision per spectral channel at least as good as:

The limit in low resolution is mostly caused by uncertainty of the photometry and independent of the binning. This limits the precision of the visibilities, not of the detection of fringes themselves. For specific science cases, usable information such as variation of some measurements with wavelength or baseline can be obtained at substantially lower magnitudes. Please contact the instrument scientist for such limits.

It was noticed back in Aug 2020 that stand-alone N-band measurements observations of faint sources (N bands fluxes fainter than about 6-8 Jy at 8 and 11 micron respectively) are affected by a bias introduced by the piston correction. Such bias is removed if the GRA4MAT mode is used.

For medium and high resolutions, additional limits are given for measurements where only the differential phase is considered, since absolute measurements are better obtained with low resolution setting. We give the limiting magnitudes to achieve a precision of 4 degree per spectral channel in differential phase, and an SNR on the coherent flux in N-band (see above for definition of spectral channel):

Limiting fluxes derived from the last commissioning run and offered in P109 on the ATs:

Limiting fluxes derived from the last commissioning run and offered in P109 on the UTs, only the number in bold are guaranteed: