SkyCat is a tool that combines visualization of images and access to catalogs and archive data for astronomy. 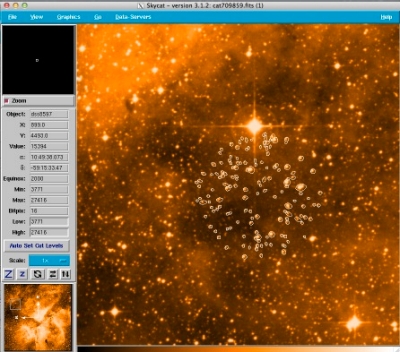 SkyCat was developed by ESO's Data Management and Very Large Telescope (VLT) Project divisions with contributions from the Canadian Astronomical Data Center (CADC).
The tool was originally conceived as a demo of the capabilities of the class library that was developed for the VLT. This software is however not actively developed any more at ESO and it has no software support allocated. It is not an operationally critical tool, and only limited user support is available.

The SkyCat binaries are freely available to any users who want to download and use the software at their own risk. ESO can only offer very limited support on Skycat. The tool is available as an executable for several platforms.

Please report problems or make suggestions by submitting a ticket to the ESO Operations Helpdesk.

We very much appreciated practicing wishful programming at large, i.e. wishing a utility, a function or just a code fragment that would just do that bit you badly need, then surfing the net, fetching it and re-using it in our code. Here is an incomplete list of packages that we either partially re-used or gave a source of inspiration. STARCAT contributed many of its internals.