Given the ongoing situation regarding Covid-19 we have made the decision to postpone the ESA-ESO meeting "New Science In The Multi-Messenger Era”, which was to have been held in Garching on 14-18 September 2020. We believe that it is highly likely that significant restrictions will still be in place, and many potentially interested participants may be unable to attend. We will endeavour to reschedule this conference once the situation has settled into a more steady state and planning can take place with reasonable certainty. We hope this will be some time in 2021.

Multi-messenger astronomy - the combination of electromagnetic light with gravitational waves or neutrinos - has come of age. The detection of gravitational waves and a kilonova from a merging neutron star binary, and the identification of a flaring blazar in coincidence with a high energy neutrino mark the beginning of an era where the detections of sources beyond the electromagnetic spectrum will become increasingly common. The facilities of both ESO and ESA are central to efforts to identify the counterparts of sources initially located by either gravitational wave or neutrino observatories, and have made pivotal contributions to these first steps into multi-messenger astronomy.

This workshop will celebrate these contributions, summarize the results gathered during the third LIGO/VIRGO observing run, and explore the long term possibilities enabled by LISA, E-ELT, Athena and more. 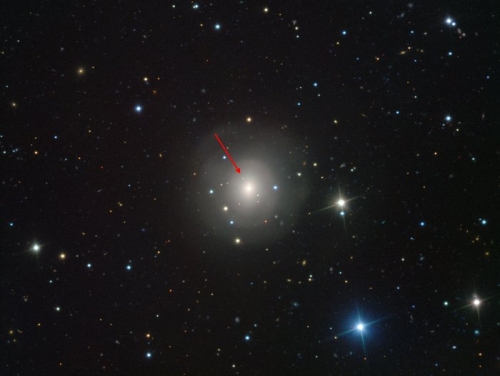 This image from the VIMOS instrument on ESO’s Very Large Telescope at the Paranal Observatory in Chile shows the galaxy NGC 4993, about 130 million light-years from Earth. The galaxy is not itself unusual, but it contains something never before witnessed, the aftermath of the explosion of a pair of merging neutron stars, a rare event called a kilonova (seen just above and slightly to the left of the centre of the galaxy). This merger also produced gravitational waves and gamma rays, both of which were detected by LIGO-Virgo and Fermi/INTEGRAL respectively.