It is certainly an understatement that Artificial Intelligence (AI) has taken the world by storm, with breakthroughs appearing almost daily in the news. Indeed, the incredible progress in computer power, the availability of large amounts of data and the ability to process them (even if they are unstructured), coupled to a theoretical understanding of techniques such as machine learning, and, more generally, data mining, has allowed AI to advance at a frantic rate, including in science. Astronomy is no exception. The sheer volume of astronomical data (which increases exponentially) necessitates a new paradigmatic approach – AI – which must be, to a large extent, automated and made much more efficient. As AI methods become more commonly used, a fundamental understanding of their premises, assumptions, and performance is due. The perspectives of information theory, neural science, and other areas on AI are expected to stimulate and guide the development of the next generation of intelligent methods used in astronomy and elsewhere. We therefore propose to host an international workshop on AI in Astronomy.

The workshop will have two aims: present the current landscape of methods and applications in astronomy and prepare the next generations of astronomers to embark on these fields. Artificial intelligence covers a wide range of algorithms and the first thing is to provide a clear map to navigate in this jungle and show which techniques is used for which kind of science. Thus, we aim at having a few invited talks by prominent speakers to clearly set the scene. This will be complemented by a series of contributed talks in order to provide a clear panorama of the current use of AI in astronomy. We also expect to have many posters showing various applications of AI in astronomy. In addition, we will offer several 3h-long tutorials and hands-on sessions to allow the participants to dig directly into the techniques.

The workshop will take place at the ESO Headquarters in Garching (Germany). 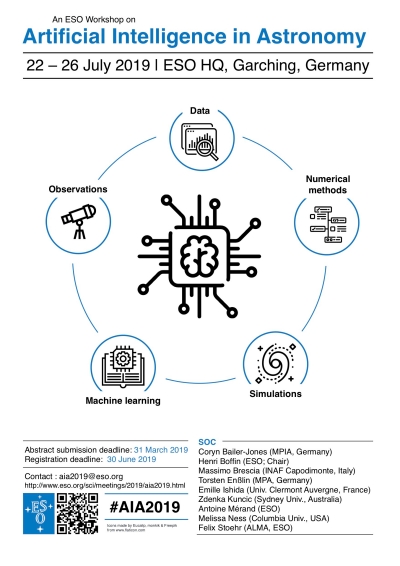