An integral part of the commissioning of a new instrument at the VLT is the Science Verification phase. SV programmes include a set of typical scientific observations that should verify and demonstrate to the community the capabilities of the new instrument in the operational framework of the VLT Observatory. In accordance with its SV Policy and Procedures (http://www.eso.org/sci/activities/vltsv/svdoc.pdf) ESO encourages the community to submit also highly challenging or risky science observations that will push VISIR and the VLT to its limits in order to better understand the performance parameter space and its envelope. Such observations should focus on the instruments core modes in order to benefit a wide community.

VISIR, the mid-infrared imager and spectrograph on the Very Large Telescope has now been successfully in operation for several years. Since the introduction of VISIR, mid-infrared detector technology has advanced significantly, and ESO, in collaboration with members of the consortium that built VISIR (CEA Saclay, France and ASTRON, the Netherlands) has upgraded the VISIR capabilities. The old 256 × 256 detectors were replaced by new Raytheon AQUARIUS 1024 × 1024 pixel arrays providing excellent cosmetics and higher sensitivity. New coronographic (both in field and pupil tracking mode) and sparse aperture masking (SAM) modes have been implemented in the course of the VISIR upgrade. In addition, the Burst Mode will be recommissioned in January 2016.

The new VISIR modes were offered to the community for Science Verification (SV) for 4 nights in February 2016. All astronomers were invited to participate in this opportunity to obtain unique science with these VISIR modes and thus to demonstrate their scientific capabilities. A call for proposals was issued, with a proposal deadline of 15 December 2015. Proposals had to use the simplified proposal template. 35 proposals were received by the deadline.

Proposals were reviewed by an internal panel and allocated time on the basis of scientific merit and feasibility, as well as in the demonstrated ability of the Principle Investigators to deliver results on a timely basis. 22 proposals were selected for execution. They are listed in the Table below.

The observations were conducted during the nights of Feb. 23-27, 2016, in Service Mode by a dedicated team of ESO astronomers. However, as weather conditions were poor during the four nights which were allocated, only a fraction of the selected SV programmes could be completed. Therefore another three half-nights (from March 19-21, 2016) were allocated to demonstrate the performance of the instrument under more representative weather conditions.

The latest version of the VISIR data reduction pipeline will be available for reduction of the SV data and the SV team will try - on a best efforts basis - to provide pipeline-reduced data to all SV PIs. Proposers are reminded that all SV data are made public worldwide immediately after passing the usual quality control checks. This will also apply to data processed by the SV team.

Clicking on the programme ID for each programme provides a link to the raw data in the ESO archive.

VISIR Science Verification data requires version 4.1.7 or higher of the VISIR data reduction pipeline. The latest version of the pipeline can be downloaded here.

VISIR includes an Annular Groove Phase Mask (AGPM) and two 4-Quadrant Phase Mask (4QPM) chronographs. The AGPM consists of a vector vortex induced by a rotationally symmetric subwavelength grating and allows for coronagraphic imaging of the close environment of stars, especially enabling the search for exoplanets and circumstellar disks. The AGPM was designed for an optimal performance in a broad range between 10.0 and 13.2 µm. The germanium-based 4QPMs consist of two quadrants on one diagonal inducing a phase shift of π, while the other two quadrants are without a phase shift. The two 4QPMs are designed to work at relatively narrow wavelength ranges (10.5 and 11.3 μm with δλ=0.4 and 0.6 μm, respectively) corresponding to spectral features of astrophysical interest (e.g. the 11.3 μm PAH emission band and adjacent continuum). Additionally, the coronographs require an appropriate Lyot stop to function properly. Only the three coronographic filters (10_5_4QP, 11_3_4QP and 12_4_AGP) are equipped with such a Lyot stop, including a central stop. Because the VISIR cold stop acts as a non-optimised Lyot stop, also other imaging filters may be used, although with somewhat lower rejection rates. The guaranteed total rejection for the AGPM in the 12_4_AGP filter under normal atmospheric conditions (optical seeing better than 0.9 arcsec) is 4. During commissioning, a peak attenuation of 1:20 and an attenuation in the wing by a factor of 2 to 4 was achieved routinely with the AGPM.

The Burst Mode corresponds to normal imaging, however all individual exposures (every DIT) is saved. Because of the relatively short exposure times of a few milliseconds typically, each frame thus contains the instantaneous PSF corresponding to the momentary atmospheric turbulence. This allows to shift and add the images, to perform lucky imaging or to apply speckle techniques in order to reach and exceed the diffraction limit of the telescopes. As the source has to be visible in every single exposure, it has to be relatively bright (we expect >10Jy). The same setups and filters as for normal imaging will be available in Burst Mode.

SAM mode of VISIR
The VISIR filters are located in a pupil plane. Taking advantage of this geometry, two filters are equipped with a sparse aperture mask (SAM). These filters are

Only these two filters can be used in the SAM mode. For the geometry of the mask, see the respective figure. There are seven sub-apertures yielding 21 non-redundant baselines. In normal operation, i.e. rotating VISIR to compensate for field rotation, the spiders of the telescope would rotate relative to the SAM-pattern and vignet the SAM pattern systematically. For that reason SAM can only be used in pupil tracking mode. As VISIR is a Cassegrain instrument this is equivalent to observing with a fixed parallactic angle and full field rotation. This angle cannot be chosen but is set by the template to keep the spiders in the obscured part of the pupil.

The SAM mode is vignetted equivalent to a reduced transmission of 11%. Given that VISIR operates in the Background Noise Limited Performance (BLIP) regime this transforms, comparing to normal filters, into a loss of S/N for point sources of a factor of three, or to maintain S/N a factor of 10 in integration time. 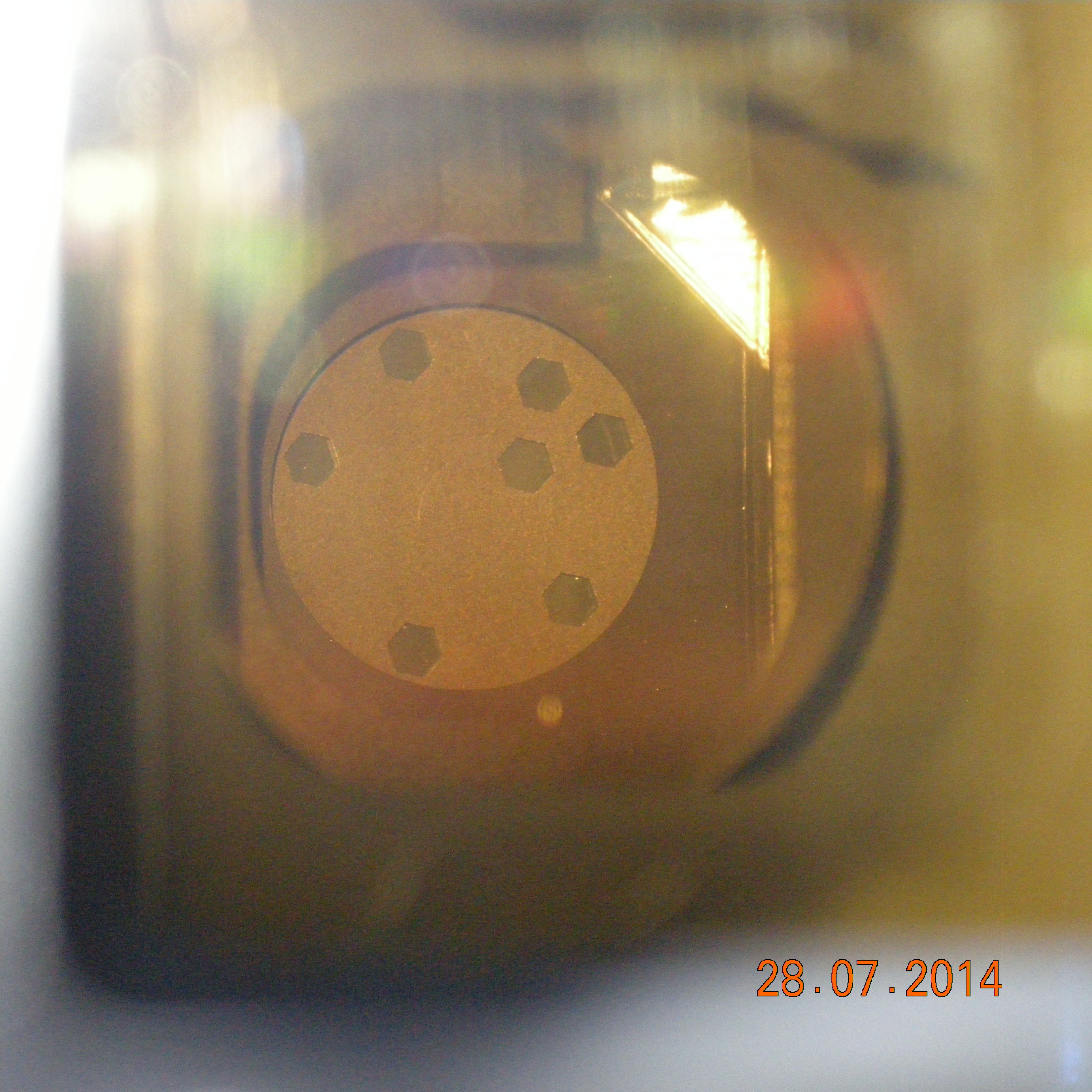 Photo of one of the SAM masks as seen from the telescope focal plane.

Additional information for creating the OBs:

The windowing is necessary to reduce the quantity of data produced, as reading out the full detector at full frame rate exceeds the current limits of the hardware at Paranal. For typical objects with a size of less than about 10 arcsec, 512×512 pixels, that  is 23×23 arcsec, should suffice. Then it is advisable to set the chopping throw to 10 or 11 arcsec, so that all for beams fit into the window for perpendicular chop/nodding (SEQ.CHOPNOD.DIR = PERPENDICULAR). To be on the safe side, one should ensure that no  files larger than 2GB are written every nodding half-cycle. E.g. for the J7.9 filter with DET.DIT = 9ms, WIN.NX = WIN.NY = 512, a total exposure time of SEQ.TIME = 120s and 1 nodding cycle (SEQ.NODNCYCLES = 1), two files with each 1.75GB will be produced after  about every 60s exposure on source.

Please read the VISIR documentation carefully and use the exposure time calculator to estimate the exposure times. Overheads may be estimated using the information in the Overheads webpage, which is available at http://www.eso.org/sci/facilities/lpo/cfp/overheads.html.