HARPS is specified to possess a precise and efficient wavelength calibration which allows to perform RV measurements with an accuracy of better than 1m/s. It is foreseen that HARPS reaches this accuracy when the Simultaneous Th Reference Method is used. The Iodine Self-Calibration Method may be capable of similar performance, but this has so far not been demonstrated. The classical fibre spectroscopy can also be used to derive radial velocities; the achievable accuracy has not been thoroughly evaluated, but we expect it to be of the order of 10 m/sec.

An intrinsic calibration accuracy at the specified level has been demonstrated at the Preliminary Acceptance Europe of HARPS using the Simultaneous Th Reference Method. It has been verified, at least on the short term, during the first period of the instrument commissioning which ended in February 2003. Results from these tests will be posted here as soon as they are available.

An estimate of the achieved signal-to-noise ratio under given observing conditions can be obtained using the Exposure Time Calculator. It is based on the UVES ETC due to the intrinsic similarity between the two instruments. It contains the efficiency data measured in the laboratory and has been verified on the sky.

The following sections give an overview of the performance for radial velocity measurements and describe the various individual components of the system. Naturally we concentrate on the Simultaneous Th Reference Method.

The performance of the determination of precise radial velocities depends on several aspects:

The stability of the spectrograph has been verified in the laboratory, using the Simultaneous Thorium Reference Method, and also during the first commissioning run at La Silla which ended on February 27, 2003. At the moment we can only report preliminary results:

To give an indication of the accuracy which can be obtained in RV determination: For a SNR (which can be predicted using the Exposure Time Calculator) of 100 the photon noise limit in stellar spectra is about 1m/s. In the Th reference spectrum the photon noise corresponds to about 20cm/sec.

The contribution of photon noise to the RV measurement error can be expressed (according to Hatzes & Cochran, Proceedings ESO Workshop on High-Resolution Spectroscopy with the VLT, M. Ulrich, ed., ESO (ESO Garching), 1992) by the generic formula

The measurement precision is proportional to the square root of the flux S and the wavelength range Δλ of the spectrograph (here: 313 nm; in practice it is the number of spectral lines and their depth that determines the precision. R is the spectral resolution).

So far we could naturally only measure the stability of the spectrograph on short time scales. During one night a drift on the order of 1m/sec was observed. A preliminary determination of the RMS (Feb. 2003) is 1.7 during the night.

For observers interested in ``pure spectroscopy'': typically a drift of less than 5m/sec in dispersion direction during the night has been observed.

The pipeline is an integral part of the HARPS system, and it is available to all HARPS observers. For the determination of radial velocities it supports only the Simultaneous Thorium Reference Method. It is described in Baranne et al (1996). A more comprehensive description is available.

The correctness of the used algorithms has been tested. Cleaning of cosmic ray hits is carefully performed because experience has shown that a single (uncorrected) hit can mimic a deviating spectral line introducing an error of several hundred metres per second. If this ``line'' stays in the reduction, it will cause an error in the final result of several metres per second.

It is important to use a stellar spectrum template of the correct spectral type for each star. The observer should therefore carefully indicate the spectral type of the target in the OB. This information is used by the pipeline to select the correct template for the reduction. The library of available templates will be successively expanded. Currently it comprises the following spectral types: G2V, K0V, M0V.

The accuracy of the RV determination suffers by [TBD] if a spectrum template of the wrong type is used.

An accurate determination of the position of the fiber hole. as well as precise target centering and accurate guiding on the fibre entrance are extremely important. For this purpose a new automatic centering algorithm has been developed and the guiding of the telescope improved. The guiding accuracy is now better than 0.05''.

In addition, both fibres (star and Th reference) pass through double image scramblers when entering into the vacuum tank of the spectrograph

In order to give the pipeline a reasonable starting point for the line identification, the radial velocity needs to be known to within 1-2km/sec.

For a final RV accuracy of 1m/sec the coordinates of the target must be known with an accuracy of at least 6'' (including proper motion).

Detector The following table contains the properties of "Jasmin" and "Linda" as measured in the Garching ODT laboratory.

Here you can find the individual (preliminary) test reports by the Garching Optical Detector Team ODT for Jasmin and Linda with tables and graphs of efficiency, a bias, a flatfield etc.

We are regularly monitoring the CCDs performance.

The following table contains the transmission/efficiency values measured in the laboratory. The same information will soon also be available from the ETC database (with the possibility for graphical display).

Reflectivity of the collimator mirror: 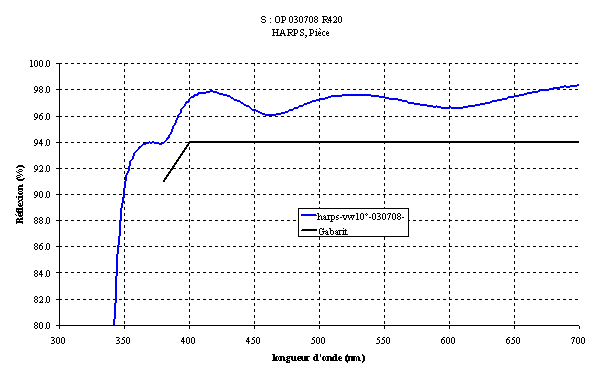