Their lights distribution is very well suited for interferometric observations, with a high flux small source surrounded by a not too faint environment. PRIMA could be able to determine relative contributions of circumnuclear starburst and compact nuclear source to the nature of AGNs, to measure the size and inclination of the dust torus, and to give indications about the velocity field.

For quasars (cf spectrum of QSO HE2217-2818 just below), PRIMA could discern details like starbust knots in their host galaxies and resolve emissions cones and reflection nebulae. 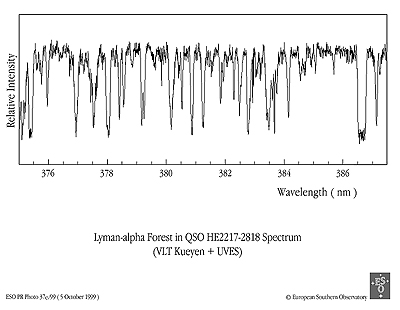 PRIMA could observe a wide variety of objects in these clouds: bright variable stars, small planetary nebulae, clusters... in the same way as these objects will be observed in our galaxy.

The closest satellite galaxies of the Milky Way are very small compared even to the Magellanic clouds. Their study is comparable to the study of globular clusters or very dense open clusters. The imaging of their core, probably containing a black hole, is very interesting and would be acessible to the VLTI ATs (we can see a picture of Centaurus A taken with the FORS2 instrument just below). 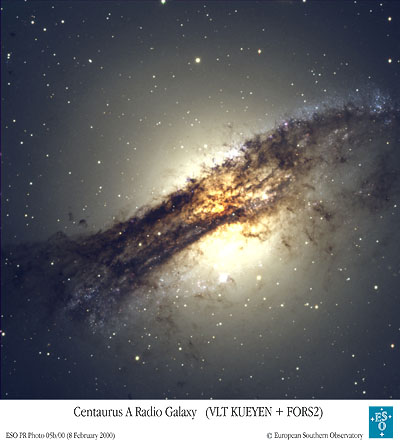 Both astrometry and imaging modes of PRIMA could be used to study the clusters dynamics.

It will be an important target for both imaging and astrometric modes of PRIMA. It will be possible to search for a counterpart of the radio source Sgr A*, usually difficult due to severe field crowding. Spectral classification of the galactic center clusters stars would help to determine its mass function, age distribution, and star formation history. At higher spectral resolution (R~2000), radial velocities can be determined.

The VLTI milli-arcsecond resolution will allow to study the immediate vicinity of far-evolved stars and of their surfaces. This concerns giants on the asymptotic giant branch, long period variables, proto planetary-nebulae phase stars, and supergiants. PRIMA is necessary to track the fringes on a nearby star, the visibility of late type being too low to track on. One can expect at least about 2000 stars with apparent diameters larger than 1 mas and declination of less than 40 degrees; roughly 400 of them have diameters larger than 10 mas. Star diameters, limb darkening, pulsation, mass loss and dust-shell properties could be measured with PRIMA. The planetary nebulae surrounding low mass evolved stars are also easy targets for PRIMA thanks to their compactness and luminosity.

Surface inhomogeneities, or "hot spots", have been observed on late type supergiants. They could be observed on Red Giants or main sequence stars with PRIMA.

PRIMA Imaging will make it possible to observe the shape of the individual interacting stars, amd to built a precise 3D-model of their shapes. This will give important clues about the atmospheres and internal structures of the stars.

Interferometry is currently the only technique which can make observations on the surface of these stars and measure their extremely small angular diameters. The observation of their environment, influenced by the large magnetic and gravitationnal fields, is also of great interest.

Circumnuclear dust disk and ejecta represent an essential step in the formation of planetary systems. But the high contrast between themselves and their host star, and their size, larger than the Airy's disk makes them very difficult targets, even with phase referencing.

Planets could be detected in the imaging mode by observing the star at two wavelengths, outside and inside molecular absorption bands (2 and 10 µm). One should observe a very small displacement of the photocenter due to the presence of a planet. This is a challenging application of PRIMA with respect to the phase measurement accuracy, instrument stability, and bias calibration.

The field of interest for imaging with PRIMA would be the imaging of the binary system during the outburst and the evolution of the ejected material with time.

PRIMA could image asteroids and comets, time precisely occultations and easily resolve the Pluto-Charon couple (cf the picture below taken by NACO). 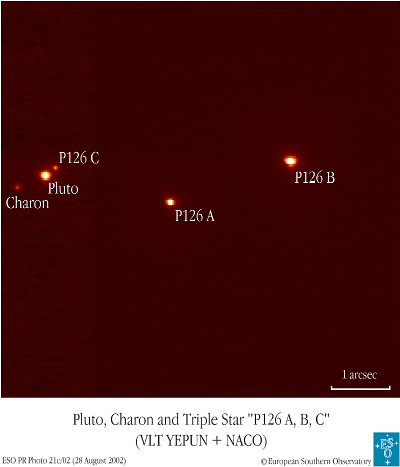 Gravitationnal microlensing splits a background star into 2 images, separated up to some milli-arcseconds and with large intensity magnifications. The VLTI will be able to resolve this splitting. However, the lensed stars are faint, so PRIMA is needed to reach the required magnitude. The measurement of the phase is not required. The micro-lensing problem could be solved only with measurements of the visibilities as a function of the spatial resolution. The VLTI is a unique tool for such a study thanks to its modular baseline structure and high sensitivity. The critical point is to make several baseline measurements in a short time (some days).

Interferometric astrometry is a complementary method to radial velocity technique for extrasolar planet detection and characterization. Firstly, the radial velocity gives only an evaluation of the planet maximum mass. Combined with astrometry, it gives its exact mass. Secondly, the applicability domains of both methods are complementary, astrometry being limited to nearby stars but being able to detect Jupiter-like planets far from the star while radial velocity is not limited by the disturbance to the system but can only detect planets close to the star.

Considering the simple case of a binary system with a star and a planet, both the star and the planet are turning around the mass center G. However this system is translating. Thus the position of G is oscillating around the line of translation of the system, this oscillation is called "the wobble" and is in this case sinusoidal (cf fig.1).

By observing the wobble (PRIMA allows performing it on Jupiter-like planets), we can determine the presence of a Jupiter-like planet and its mass. If there are some other planets around the star, the wobble isn't sinusoidal anymore. Combined with the radial velocity techniques, the wobble's observation and the shift of the wavelengths due to the Doppler effect (cf fig.2) allows determining the orbit plane inclination and the planet exact mass.

An astrometric measurement acccuracy of 10 µas would allow the detection of Jupiters around pre-main-sequence stars up to a distance of 240 pc, Uranuses up to 44 pc and 10 Earth-mass planets up to 1.5 pc. But a 50 µas accuracy provides already very interesting science with Jupiters around pre-main sequence stars up to 48 pc, brown dwarfs arround all M dwarfs to VLTI sensitivity limit and Uranuses up to 9 pc.

Gravitationnal micro-lensing events splits the background star image into two spots separated by some mas with large intensity differences. The image photocenter moves as a function of the relative position of the lensing body and the background star. The amplitude of the photocenter movement depends mainly on the lensing body distance from the observer and on its mass. Thus astrometry can be used to discriminate between micro-lensing due to Magellanic cloud faint stars or to MACHOs, in our own galactic halo. There is indeed a factor 30 between the astrometric effects of both bodies, reaching several hundreds of µas, for the MACHOs and only some tens of µas in the case of Magellanic cloud lensing body. Astrometry can also be used to determine the mass and Einstein's radius of lensing objects when looking toward the galactic center and to discriminate them as stellar mass black hole or ordinary star.

The VLTI has a large advantage relative to other astrometric interferometers: it is located in the southern hemisphere, with the galactic center passing by the zenith and with access to the Magellanic clouds during most of the year.

Full orbits of spectroscopic binaries can be used to determine the masses of the two components and the precise distance to the system. There are a number of astrophysical applications of such measurements, including tests of stellar evolutionnary tracks and the role of convective overshoots. Astrometry, combined with single-lined spectroscopic observations, will give a full solution of this problem for a large number of stars.

In open clusters, the determination of binary frequences and their orbital characteristics has a thorough impact on the scenarios of star formation and the evolution of stellar systems. For stars with masses ranging from solar-type stars to early M dwarfs extensive work has been carried out using radial velocity measurements. However, almost no data are available for massive stars, whose duplicity statistics knowledge would certainly have an impact on our understanding of star formation. Many young open clusters up to a distance of about 1 to 2 kpc can be selected as potential targets to look for binarity in massive stars. This kind of work will need the ultimate accuracy of PRIMA.

Globular clusters and the galactic center

The globular clusters are very important systems to understand fundamental dynamical processes such as relaxation, mass segregation, core collaps, tidal effects and so on (you can see a globular star cluster just below). 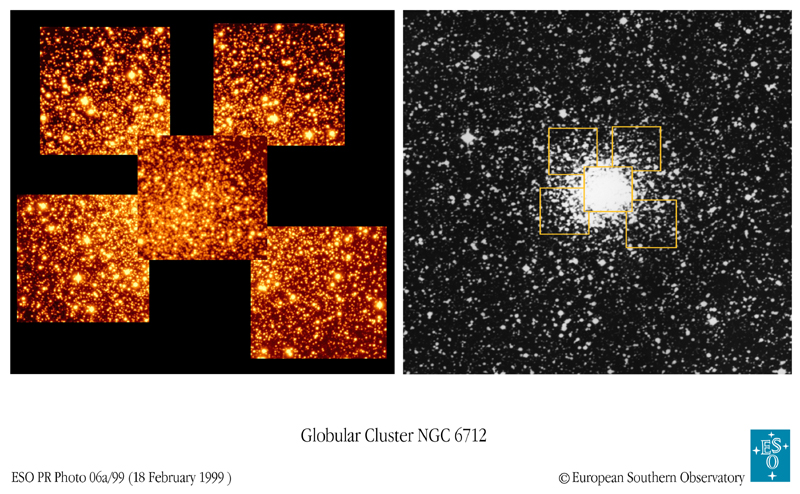 Measurements of proper motions, combined with radial velocities, would give access to 3D space velocities. A strong improvement of our understanding of internal dynamics of such objects can therefore be expected. The internal motions in globular clusters are of the order of 5 to 10 km/s. So we need to reach a 1 km/s measurement accuracy, i.e. a 10 µas/yr accuracy at 10 kpc, giving access to all galactic globular clusters.

In the same order of ideas, 3D space velocities in the central 0.1 pc of our galaxy would give a much better picture of its dynamic and would provide a strong argument for the presence of a massive black hole in its center. In addition to further constraining the mass distribution, these measurements would also provide clues about the history of the galactic center cluster.

In principle, trigonometric parallaxes with 10% errors can be derived with PRIMA for targets out to a distance of 10 kpc. There are 2 major difficulties, however: the need to find a bright star guide for phasing the interferometer, and the relative nature of parallaxes measured over small fields. The first issue is not a problem for intrinsically bright objects (i.e. Mira variables). The conversion of relative parallaxes into absolute parallaxes may in some cases be accomplished through the careful choice of the reference object(s).

The astrometric mode in PRIMA will also provide a unique possibility to determine the so-called AGN Dance-centroid due to SN explosion predicted by the Starburst model, events occuring roughly once per year. The AGN centroid would appear to move by a few tens of µas, within the nominal sensitivity of PRIMA, as long as reference bright star can be found in the isoplanatic patch.