A skyline shot of the Paranal Observatory taken in 2007 showing two more telescope enclosures in addition to the Very Large Telescopes(VLT). The VLT Survey Telescope (VST) shares the mountaintop with the VLT, while the Visible and Infrared Survey Telescope for Astronomy(VISTA) rises on the hill to the right. In the foreground are the Residencia and the basecamp.

1. CALL FOR OBSERVING PROPOSALS FOR PERIOD 87

The Call for Proposals for observations at ESO telescopes during Period 87 (1 April 2011 - 30 September 2011) has been released. In addition to the VLT and the La Silla telescopes, in this period proposals for open time on VISTA are invited. For the VLTI, new Auxiliary Telescope baselines are available. On APEX, the Z-Spec PI instrument is offered in collaboration with the instrument team, subject to successful commissioning in October 2010.

The deadline for proposal submission is 30 September 2010, 12:00 noon CEST. The full Call for Proposals and the ESOFORM electronic submission package can be obtained here. Users should note that the Short and Normal Programme types have been merged. The Normal Programme proposal template, which should be used for all programme types except Large, has undergone major changes since the last period. In particular, a new length limit of two pages has been introduced for the combination of the scientific description of the programme and the attachments (figures and tables).
In order to avoid last-minute problems, users are strongly encouraged to fully verify their proposal well ahead of its actual submission,using a preliminary version including all necessary fixed-format technical information, but possibly incomplete or with non-final text (see the ESOFORM manual for details).

2. ANNOUNCEMENT OF CALL FOR PROPOSALS FOR MULTI-OBJECT SPECTROSCOPIC FACILITY

ESO is about to issue a Call for Proposals for the conceptual design of a new multi-object spectroscopic facility. The Call will appear under Science Users Information within the next week.

Reflex is the ESO Recipe Flexible Execution Workbench, an environment to run ESO VLT pipelines which employs a workflow engine to provide a real-time visual representation of a data reduction cascade, called a workflow. A workflow accepts science and calibration data, and organises them into groups of files. The data organisation process is fully automatic and the workflow provides optional user interactivity at key data reduction points, enabling a user-friendly way of optimising the data reduction in terms of quality andsignal-to-noise.

Reflex v1.0 contains a workflow for reducing UVES Blue Arm data, along with a number of complete test datasets so that users can start experimenting and familiarizing themselves with the system. Reflex makes it easy to inspect the intermediate and final data products in the reduction cascade, and advanced users can plug-in their own modules and steps into the data reduction sequence. Reflex supports the development of data reduction workflows based on the ESO Common Pipeline Library, and more workflows will be released in the coming months to support various VLT instruments.

Further details of Reflex and download of v1.0 are available here. 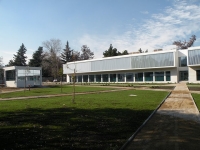 4. OPENING OF THE NEW ALMA OFFICE BUILDING IN SANTIAGO

On 1st September 2010 ALMA staff in Chile take up residence in the newly completed office building. The new building is situated on the same site as the ESO Santiago Office and has two floors with over 100 offices as well as meeting rooms, an auditorium and a cafeteria. The floor area is about 2400 m2 and there is underground parking available. The proximity of the ESO and ALMA buildings is expected to enhance the scientific atmosphere in Vitacura.

Details of the ALMA project and its progress are available on the ALMA website.

A new version of the Bolometer Array analysis software (BoA) is now available for download.

The main additions compared to the original BoA release include:
* support for the Submillimetre APEX Bolometer Camera (SABOCA)
* support to process data observed with the wobbling secondary, and in particular the photometry modes for both the Large Apex BOlometer CAmera (LABOCA) and SABOCA
* functions to mask or subtract a model from the data.

ESO has an active fellowship programme in both Garching and in Chile, with a yearly application deadline. The goal of these fellowships is to offer young outstanding scientists the opportunities and facilities to enhance their research programmes in close contact with the activities and staff at ESO. The closing date for applications for ESO Fellowships, to be taken up in 2011, is 15 October 2010. Full details can be found here. Applications should be made online through the ESO recruitment portal.

The International Max-Planck Research School on Astrophysics is a joint graduate school of the Max-Planck Institutes for extraterrestrial Physics (MPE) and Astrophysics (MPA), the Observatory of the Ludwig-Maximilians University (LMU) and ESO. Applicants for IMPRS studentships should hold a Bachelor or Masters Degree or Diploma in Physics or Astronomy (or equivalent), including a corresponding thesis.Successful applicants will receive a tax-free allowance of about EUR 1200-1500 per month (depending on family status). Support in all administrative matters, such as visa, housing and access to free language classes, is provided.

More details on the IMPRS programme and the admission requirements can be found on the IMPRS website. All applicationmaterial may be submitted by e-mail.

Closing date for applications is December 1, 2010 for the programme starting onSeptember 1, 2011.

A new query form has been released that allows the VISTA/VIRCAM archive to be queriedby instrument specific parameters to access observations performed since April 1st, 2010.

New data releases since the last ESO-Enews notice on the archive are:

The list of workshops organised by ESO can be found here.

Registration for the following workshops is open:

Compact binaries divide into many classes depending upon the mass of the components, the mass transfer rate, the magnetic fields involved and whether the primary star is a white dwarf, neutron star or black hole. However, the evolution of all these objects is driven by a common mechanism: angular-momentum loss. This workshop plans to bring together people from different binary star communities but will be focused on one specific problem, namely binary evolution.

Further information can be found here and more details can be obtained by e-mail.

The dynamics of low-mass stellar systems, from star clusters to dwarf galaxies, is not only an interesting subject in its own right, but is also linked to global theories of structure formation, the physics of gravity, and the shape of the stellar initial mass function. Given the wealth of new information gathered recently in this field, the time is ripe for a dedicated meeting. The aim is to bring together a mix of astronomers from both observations and theory that work on the dynamics of dwarf galaxies and star clusters.

Further information can be found here and more details are available by e-mail.

Deadline for registration is 15 January 2011.