The Messenger 185 is now available 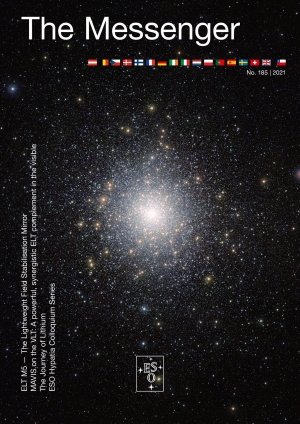 The latest edition of ESO's quarterly journal, The Messenger, is now available online. This Issue 185 completes the series of articles dedicated to the the ESO's Extremely Large Telescope mirrors by presenting the lightweight field stabilisation mirror M5. Further, readers will get acquainted with the specifics of a new instrument for the VLT: MAVIS, which will be a powerful synergistic complement to the ELT in the visible wavelengths range.

This issue also features articles detailing the scientific outcomes of the completed survey LEGA-C, which studies the stellar populations and stellar kinematics of galaxies 7 Gyr ago, as well as the journey of lithium, which is amongst the most enigmatic elements with several issues regarding its nucleosynthesis and evolution in stars and the Galaxy.

The issue concludes with reports on several ESO workshops and other ESO related scientific meetings, as well as reviews of various activities that ESO has set up or contributed to to support early career scientist.