The 3.6m New Technology Telescope (NTT) saw first light in March 1989. CCD frames were obtained on which stellar images had FWHM diameters of 0.33, indicating the excellent imaging quality of this telescope.

The NTT is an alt-az telescope. It resides in a rotating building; the control room was moved to a new building located close to the bottom of the NTT ramp in 2003, so now the observers don't rotate with the telescope any longer. 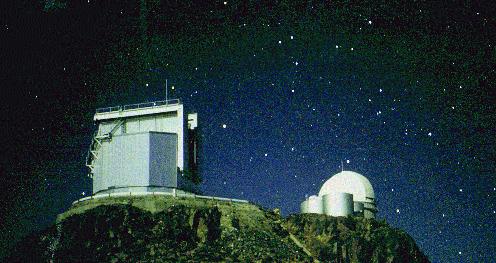 The NTT at night, with the dome of the ESO 3.6m in the background.

The telescope chamber is ventilated by a system of flaps which optimize the air flow across the NTT minimizing the dome and mirror seeing. All motors in the telescope environment and hydraulic system are water cooled to prevent heat input to the building. For the same reason, all the electronics boxes located on the telescope are insulated and cooled. The concrete platforms and parking lots around the telescope are painted in a bright white in order to minimize the accumulation of heat during day time.

The primary mirror is actively controlled to preserve its figure at all telescope positions. The secondary mirror position is also actively controlled in three directions. The optimized airflow, the thermal controls,  and the active optics give the excellent image quality of the NTT. Note that the NTT has active instead of adaptive optics: it corrects the defects and deformation of the telescope and mirror, but dos not correct the turbulence; it ensures that the optics is always in perfect shape. Together with the thermal control, it allows the NTT to reach the ambient seeing, but it does not improve it. The main mirror is frequently cleaned using carbonic snow (weekly) and water (every six months), maintaining its reflectivity to an optimal value of ~88-90%.

The NTT has a rigid construction due to the reduced mass of the primary mirror and telescope structure compared with classical telescopes. This result is a very accurate pointing of 1.5'' r.m.s. over most of the sky. Degradation occurs close to the zenith and at zenith angle larger than 60 degrees. Tracking accuracy at 0.1'' matches the overall image quality of 80% energy in 0.15'' diameter. For short exposures (less than 10m on not moving targets) the tracking is so good that it is better not to use the guiding at all.

There are two Nasmyth focus platforms to mount two sets of instruments simultaneously. To switch from one to the other, a 45-degree third flat mirror is rotated by 180 degres. Change-over therefore takes little time. The instrumentation presently consists of EMMI for optical imaging in blue and red, low/medium/high resolution spectroscopy, SUSI2 for high-resolution imaging, and the new ESO infrared instrument SOFI.

Two guide cameras, one for each Nasmyth focus, are available: they have a pixel size of 0.2" and the orientation of the images is N on the top and E on the left. A slit viewer camera is available on Nasmyth B; it has a pixel size of 0.24" and its orientation is N on the left and E on the bottom. It is used to place targets in the EMMI slit for medium dispersion spectroscopy and it is reliable for objects down to 19 magnitude in R.

The NTT electronics (i.e.. encoders, drive motors and velocity controllers) were replaced.  Also, all the computers were replaced. The old TV cameras for the autoguiders, slit viewer, image quality and image analysis were replaced by VLT standard technical CCDs.

The control system time keeping relies on a dedicated GPS receiver (located on the roof of the NTT) for UT time. The receiver electronics has a backup clock should no satellites be available.

The control software, is also compliant with the VLT standards. This relies heavily on Rtap, a commercial real time system (HP). Rtap provides the workstation database and messaging systems for the conNTT Upgrade Plan (PS document)

Photos of the NTT

Click on the thumbnail to load the full-size image.

Achievements of the NTT

Highlights of the scientific results obtained with the NTT are described in this other page.