MATISSE is now in operation at Paranal, this was the web page for the development phase and is now obsolete. Please visit the operations web page maintained by PAO SciOps here:

The objective of MATISSE is image reconstruction. It will extend the astrophysical potential of the VLTI by overcoming the ambiguities existing in the interpretation of simple visibility measurements. MATISSE will measure closure phase relations thus offering an efficient capability for image reconstruction.

The unique performance of MATISSE is partly related to the existence of the four large apertures of the VLT (UTs) that permits to push the sensitivity limits to values required by selected astrophysical programs such as the study of Active Galactic Nuclei and protoplanetary discs.

Moreover, the evaluated performance of MATISSE is linked to the availability of ATs which are relocatable in position in about 30 different stations allowing the exploration of the Fourier plane with up to 200 meters baseline length. Key science programs using the ATs cover for example the formation and evolution of planetary systems, the birth of massive stars as well as the observation of the high-contrast environment of hot and evolved stars.

During Phase A, three constituents of the planetary systems were idendified for which MATISSE will bring new insight:

The AMBER and MIDI instruments have started to observe the brightest protoplanetay disks in the infrared sky, approximately a dozen objects. The current capabilities of other observatories are similar (see e.g. Keck Interferometer)

.In addition, in our own solar system, a few asteroids have been observed by MIDI (Delbo et al. 2009, ApJ 694, 1228), demonstrating the feasibility to characterize solar system minor bodies with interferometry.

The second important science topic is active galactic nuclei. The nominal MATISSE sensitivity in blind mode at N-band is 0.6 Jy in 4-telescope mode, similar to the nominal MIDI sensitivity, although to date MIDI has been used to obtain correlated fluxes of AGNs down to 0.17 Jy. The nominal L-band sensitivity from the performance analysis is 0.1 Jy. For MIDI observations, various lists of AGNs have been assembled, often based on the list of Veron-City and Veron 2006 (A& A 455, 773).

MATISSE is a mid-infrared spectro-interferometer combining the beams of up to 4 UTs/ATs of the VLTInterferometer.

The number of combined beams is 4. The instrument will be able to operate with 3 or 2 beams. The instrument sensitivity, sampling and throughput are optimized for L and N. The L band is specified from 3.2 to 3.9 μm and the N band from 8.0 to 13.0 μm. MATISSE will operate also in M band, from 4.5 to 5.0 μm. The L, M and N bands can be observed simultaneously.

MATISSE will measure: coherent flux, visibilities, closure phases and differential phases. Differential visibilities can also be derived. These quantities will be measured as a function of the wavelength in the selected spectral bands and resolutions.

MATISSE is a four-beam experiment with a multi-axial global combination. The interferometric beam and the photometric beams receive respectively I and P fraction of the incoming flux (observations without photometric channels are also possible). For an observation with 4 telescopes with photometric channels, 5 images are produced on the detector (4 photometric channels and the interferometric one).During observations with 4 telescopes, the interferogram (in each spectral channel) contains a pattern with 6 fringe periods and is dispersed in the spectral direction. The spatial size of this interferometric channel is larger than the photometric ones in order to optimize the sampling of the 6 fringe structures. The beam combination is made by the camera optics. At this level, the beam configuration is non redundant (separation B between beams equal to 3D, 9D and 6D where D is the spatial diameter of the beam) in order to avoid crosstalk between the fringe peaks in the Fourier space.

The Fourier transform of each spectral column of the interferometric image is thus composed by 6 fringe peaks centered at different frequencies Bij/λ (3 D/λ, 6 D/λ, 9 D/λ, 12 D/λ, 15 D/λ, 18 D/λ) and a low frequency peak that contains the object photometry and the thermal background coming from the 4 telescopes. In order to measure the coherent fluxes with a good accuracy, the design of MATISSE is based on the use of spatial filters, including image and pupil stops.

In order to measure closure and differential phases with a good accuracy, a beam commutation can be made in order to reduce the effect of the instrumental defects on the useful signal.

To measure the coherent fluxes and all the derived interferometric measures such as the differential visibility and phase and the closure phase, the key problem is to eliminate the cross talks between the low frequency peak and all the other peaks that introduce sensitivity of the fringe peaks to variations of the thermal background. Two methods are combined in MATISSE to ensure this result with a large margin: spatial modulation like in AMBER combined with temporal modulation like in MIDI. In addition, to measure the absolute visibility we also have to find the true source photometry. To do that, it is necessary to separate the stellar flux from the sky background, using chopping.

Some devices such as artificial sources, hot screen, optics for flat field or pupil visualization, special material for spectral calibration are implemented in the instrument in order to perform alignment, test, maintenance, calibration and acquisition operations.MATISSE will operate with 2 modes:

The figure shows a 3D optical layout for the set of four beams inside the cryostat for the LM band. 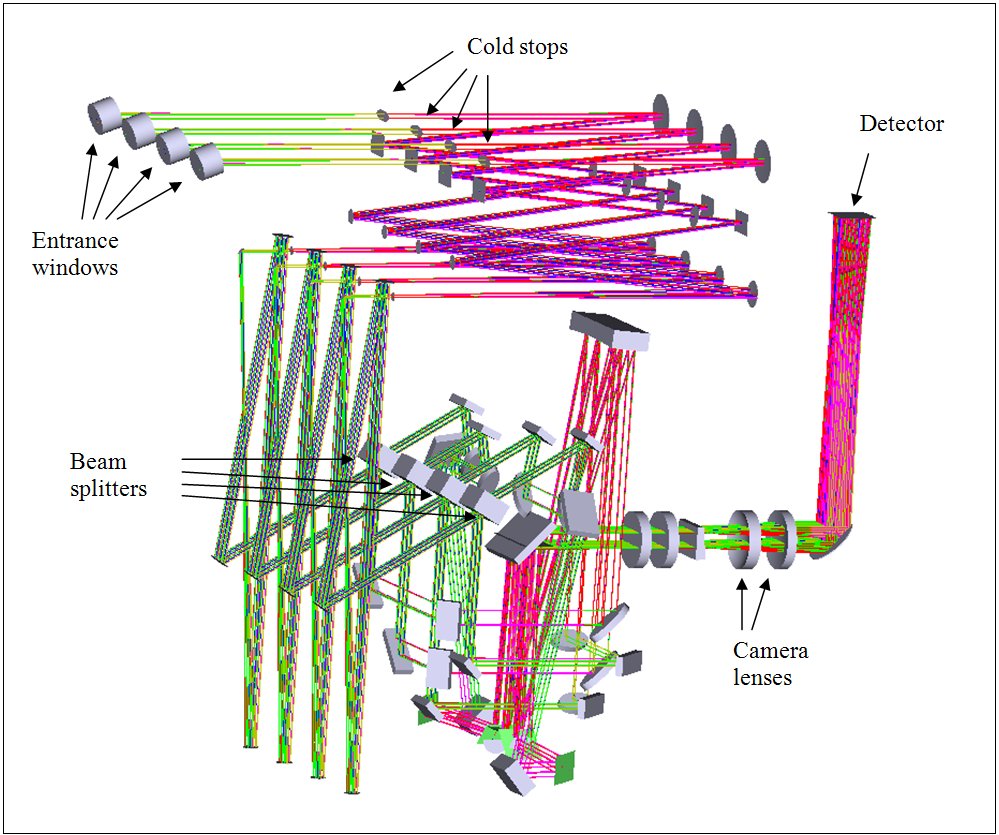