VISTA, built by a large UK-based consortium, is a 4-m class wide field survey telescope for the southern hemisphere. VISTA is located at ESO's Cerro Paranal Observatory in Chile on its own peak about 1500m from the four VLTs and the VST.The telescope has an altitude-azimuth mount, and quasi-Ritchey-Chretien optics with a fast f/1 primary mirror giving an f/3.25 focus to the instrument at Cassegrain. Shape and position of the mirrors are actively controled by high and low order curvature wave front sensors (WFS) located inside the instrument focal plane. The low order WFSs are used simultaneously,during the scientific observations.Equipped with a near infrared camera it covers a 1.65 degree diameter field of view with a loosly packed detector mosaic of 67 million pixels of mean size 0.339 arcseconds. Broadband filters are available for the Z,Y,J,H and Ks bands and narrow band filters at 0.98/0.99(two complementary half-sets sharing the same slot on the filter wheel) and 1.18 micron. The point spread function (PSF) of the telescope+camera system (including pixels) is expected to have a full width at half maximum (FHWM) of 0.51 arcsecs.

Although some open time is available on VISTA, VIRCAM is mostly used for public surveys, which have been reviewed by the "Public Survey Panel" (PSP), and recommended by the ESO Observing Programme Committee (OPC), following the "Call for Proposals for VISTA Public Surveys" (first round issued in January 2006, second round in 2016). The first observations for the public surveysstarted on November 4, 2009 in a "dry run" phase. Some of the first generation suvreys have finished, the remaining ones are being continued.

A second round of public surveys has been approved in 2016 and they are being observed as of April 2017 (period 99), with some carry-under for some of the surveys. 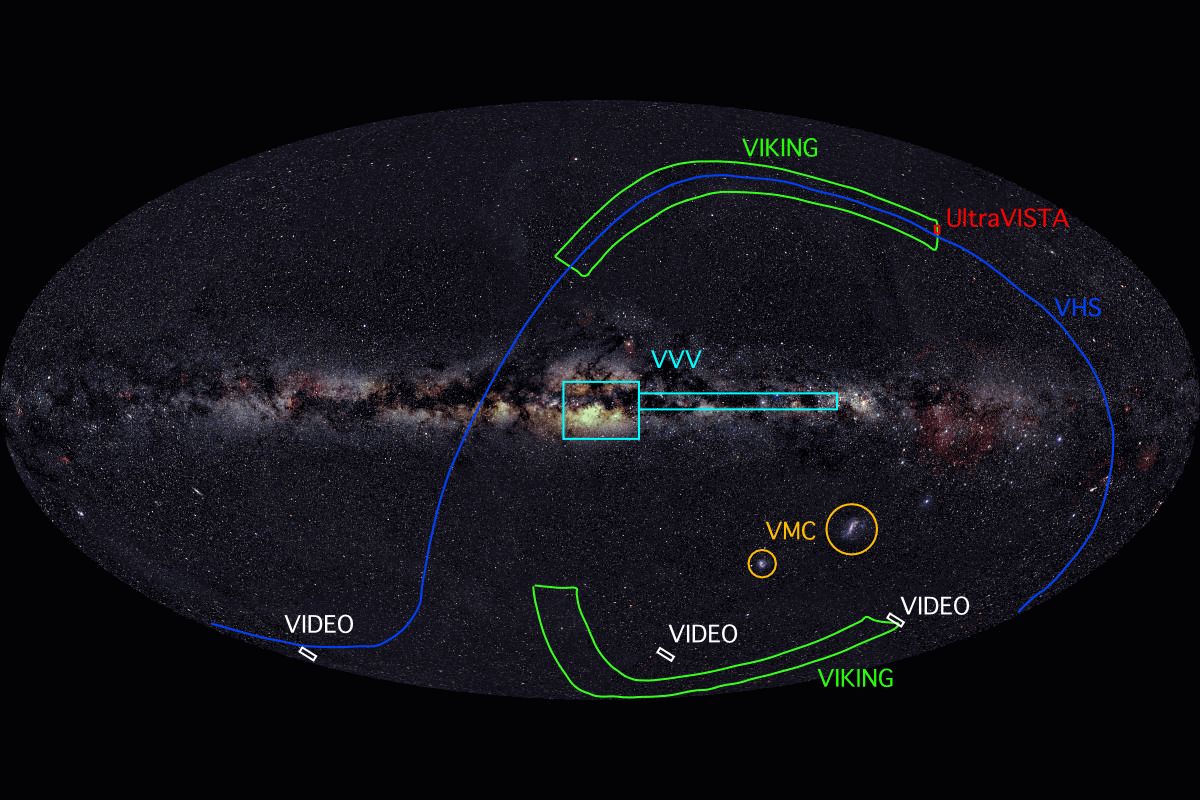 overview of the survey status

The mean VISTA data volumes are high (estimated ~315 GigaByte on a typical night). Individual pawprints extracted from the ESO archive can be passed through a calibration pipeline at Garching that will remove instrumental artefacts, and produce astrometrically and photometrically calibrated single pawprints. These will be used primarily for the instrument calibration and monitoring purposes.

The UK-based VISTA Data Flow System (VDFS) receives a copy of all VISTA raw data by agreement with ESO, and is required to fully respect the proprietary rights assigned by ESO to observations. The VDFS will further combine the pawprints into tiles, extract sources and place these in a VISTA Science Archive where authorized users can interrogate the data and use tools to combine it into survey products. Survey data processing by the VDFS is not guaranteed. Survey PIs must contact the VDFS project leader to further coordinate the steps.