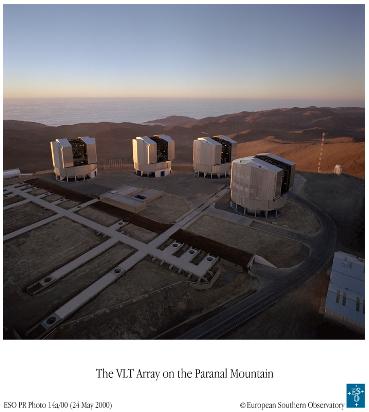 The Very Large Telescope Interferometer (VLTI) consists in the coherent combination of the four VLT Unit Telescopes or the four moveable 1.8m Auxiliary Telescopes. The VLTI provides milli-arcsec angular resolution at low and intermediate (R=5000) spectral resolution at near and mid-infrared wavelengths.

The four 8.2-m Unit Telescopes (UTs) and the four 1.8-m Auxiliary Telescopes (ATs) are the light collecting elements of the VLTI. The UTs are set on fixed locations while the ATs can be relocated on more than 10 different stations. VLTI instruments all recombine the light from four telescopes simultaneously. After the light beams have passed through a complex system of mirrors and the light paths have been equalized by the delay line system, the light re-combination is performed by the PIONIER and GRAVITY instruments in the near infrared and by MATISSE in the mid-infrared part of the spectrum.

Due to its unique characteristics, the VLTI has become a very attractive means for scientific research on various objects like young pre-main sequence stars and their protoplanetary disks, post-main sequence mass-losing stars, binary objects and their orbits, solar system asteroids, and extragalactic objects such as active galactic nuclei.

VLTI users are actively supported by the VLTI Expertise Centers.

The latest news on the observatory status can be found on this page.