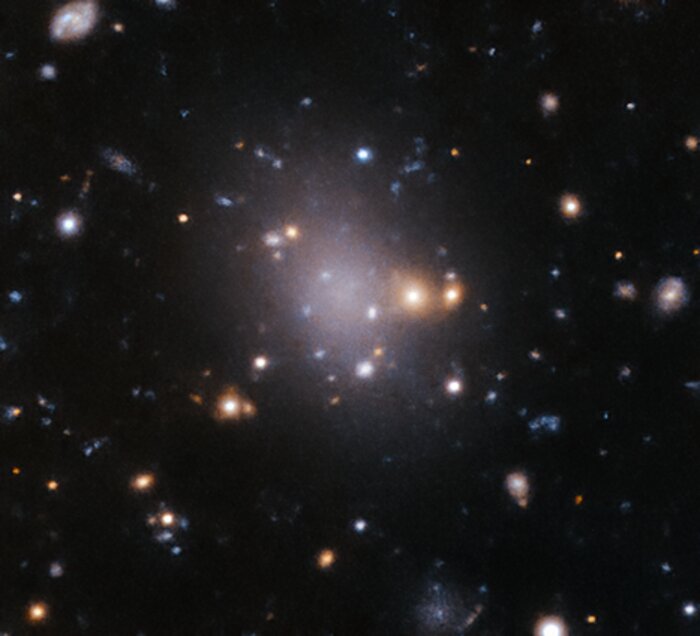 If you look closely at the faint and fuzzy centre of this picture, you will find a ghostly galaxy — the not-so-spooky-sounding UDG4 — captured using ESO’s VLT Survey Telescope (VST).

UDG stands for ultra-diffuse galaxy: objects as large as the Milky Way but with 100 – 1000 times fewer stars. These galaxies are extremely faint and lack star-forming gas, which makes them appear almost like a fluffy cosmic cloud, or a smudge in space. Their origins remain uncertain, but astronomers speculate that they could be “failed” galaxies that lost their gas supply early in their lifetimes.

This image of UDG4 was taken as part of a study from a much larger program, the VST Early-type Galaxy Survey (VEGAS), which aims to investigate very faint structures in galaxy clusters — large groups of many galaxies bound together by gravity. The study, led by Enrichetta Iodice from the Istituto Nazionale di Astrofisica in Italy, has found several UDGs in the Hydra Cluster, but more observations are needed to elucidate their true nature.

Given their flimsy appearance, UDGs can be difficult to spot. Nevertheless, the VST, equipped with its OmegaCAM camera, provides exquisite sensitivity to light, allowing astronomers to study such elusive objects.