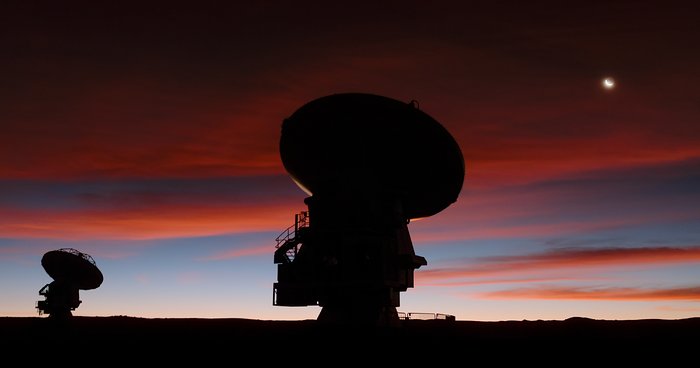 This ESO Picture of the Week, captured by ESO Photo Ambassador Petr Horálek, shows a bright crescent Moon hanging above the Chilean Andes, embedded in a blood-red sky that floods the frame with waves of deep crimson. Also seen here are a couple of the antennas belonging to the Atacama Large Millimeter/submillimeter Array (ALMA), a state-of-the-art observatory that studies light from some of the coldest objects in the Universe.

The silhouetted duo of antennas are seen peering upwards, eager to begin their evening of stargazing — and impatient for the eye-catching ripples of cloud to clear. At an altitude of 5000 metres in the arid Atacama Desert, clouds like these are relatively uncommon. The atmosphere in this region of northern Chile is incredibly dry and regularly leads to  clear skies, offering around 300 cloudless nights per year!

ALMA has 66 individual constituent antennas, each of which can be moved very precisely around the vast Chajnantor plateau to create a variety of configurations. When working together they can produce much higher resolution observations of the cosmos than they can individually, and collectively they form the largest ground-based astronomical project in the world.