A Pocket of Star Formation

This new view shows a stellar nursery called NGC 3324. It was taken using the Wide Field Imager on the MPG/ESO 2.2-metre telescope at the La Silla Observatory in Chile. The intense ultraviolet radiation from several of NGC 3324's hot young stars causes the gas cloud to glow with rich colours and has carved out a cavity in the surrounding gas and dust.

NGC 3324 is located in the southern constellation of Carina (The Keel, part of Jason’s ship the Argo) roughly 7500 light-years from Earth. It is on the northern outskirts of the chaotic environment of the Carina Nebula, which has been sculpted by many other pockets of star formation (eso0905). A rich deposit of gas and dust in the NGC 3324 region fuelled a burst of starbirth there several millions of years ago and led to the creation of several hefty and very hot stars that are prominent in the new picture.

Stellar winds and intense radiation from these young stars have blown open a hollow in the surrounding gas and dust. This is most in evidence as the wall of material seen to the centre right of this image. The ultraviolet radiation from the hot young stars knocks electrons out of hydrogen atoms, which are then recaptured, leading to a characteristic crimson-coloured glow as the electrons cascade through the energy levels, showing the extent of the local diffuse gas. Other colours come from other elements, with the characteristic glow from doubly ionised oxygen making the central parts appear greenish-yellow.

As with clouds in the Earth's sky, observers of nebulae can find likenesses within these cosmic clouds. One nickname for the NGC 3324 region is the Gabriela Mistral Nebula, after the Nobel Prize-winning Chilean poet [1]. The edge of the wall of gas and dust at the right bears a strong resemblance to a human face in profile, with the "bump" in the centre corresponding to a nose.

The power of the Wide Field Imager on the MPG/ESO 2.2-metre telescope at ESO's La Silla Observatory also reveals many dark features in NGC 3324. Dust grains in these regions block out the light from the background glowing gas, creating shadowy, filigree features that add another layer of evocative structure to the rich vista.

The sharp sight of the Hubble Space Telescope has also been trained on NGC 3324 in the past. Hubble can pick out finer details than the panoramic view of the Wide Field Imager, but only over a much smaller field of view. The two instruments when used in tandem can provide both "zoomed-in" and "zoomed-out" perspectives.

[1] Further explanation and comparison images can be found on the site of the amateur astronomer Daniel Verschatse: http://www.verschatse.cl/nebulae/ngc3324/medium.htm. 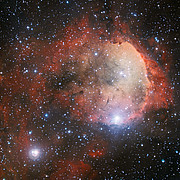 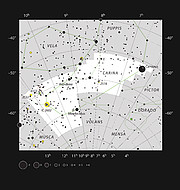 PR Video eso1207a
Zooming in on the star formation region NGC 3324
Send us your comments!
Subscribe to receive news from ESO in your language
Accelerated by CDN77
Terms & Conditions