ALMA and GMVA Observations in Cycle 4 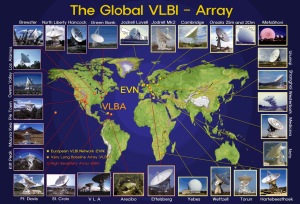 People interested in proposing VLBI observations with ALMA should be informed that ALMA will participate in some GMVA observations during ALMA Cycle 4 at 3mm wavelengths in the period Oct 1 2016 - Sept 30 2017. More details can be found in the ALMA Cycle 4 Pre-announcement.

The Global 3mm VLBI Array (GMVA) consists of 8 VLBA antennas equipped with 3mm receivers: the 100m GBT, the IRAM 30-m telescope on Pico Veleta (Spain), the phased 6-element IRAM interferometer on Plateau de Bure (France), the MPIfR 100-m radio telescope in Effelsberg (Germany), the OSO 20-m radio telescope at Onsala (Sweden), the 14-m telescope in Metsähovi (Finland), and the OAN 40-m telescope in Yebes (Spain). In addition, telescopes of the Korean VLBI Network (KVN) may now be requested as part of the GMVA. The Large Millimeter Telescope Alfonso Serrano (LMT) in Mexico, for use at 3mm in combination with the GMVA, is offered on a best effort basis.

Part of the GMVA session in 2017 will overlap with Cycle 4 time slots dedicated to GMVA + ALMA observing. In additio, to submitting a proposal to ALMA before the deadline in April 2016, users who wish to apply for ALMA  Band 3 VLBI observations must also submit a GMVA proposal submitted via the NRAO Proposal Submission Tool before the 1 February 2016 deadline.

People who will like to use this opportunity can consult the ALMA Science Portal.