The feasibility of an ALMA Band 9 upgrade from the existing double-sideband (DSB) configuration to sideband-separating (2SB) was shown in an ESO study performed by NOVA several years ago. Since then, the design of the sideband-separating mixer has been developed further and shows significant improvement of the key parameters, namely sensitivity (noise temperature) and image rejection ratio (IRR). Two DSB Band 9 receiver cartridges were converted to 2SB operation, one for the LLAMA observatory on Argentina and one for the SEPIA facility instrument on the APEX telescope in Chile. The latter receiver has successfully passed its science commissioning phase, with several key performance parameters far exceeding the specification. These two receivers offer a total IF bandwidth of 4×8 GHz, which is double the total bandwidth of any of the current ALMA receivers.

In this study, we intend to investigate and report on the following issues:

1. Further extension of the IF bandwidth to 4x12 GHz or even more, without compromising the other performance parameters;

2. The availability of a sufficient number of SIS mixer devices at NOVA to enable a full array upgrade; if negative, the possibilities of new wafer runs in other facilities;

3. Optionally, the improvement of the optical cross-polarization performance with respect to the currently installed receivers;

4. The expected cost, both in new hardware and labour, for all existing ALMA Band 9 receivers to be upgraded, including options for increased IF bandwidth and optical performance as mentioned above;

5. The expected cost for a limited number of pre-production receiver modules to allow field-testing of array operations.

6. The possibility of performing a rolling or subarray-based upgrade, allowing the rest of the Band 9 array to stay in operation during the upgrade, at least partially.

Even without any further widening of the IF bandwidth beyond the demonstrated factor of 2, this upgrade will increase the ALMA sensitivity in Band 9 by 20-30% on average for spectral line observations. 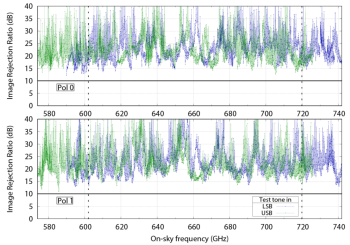