This study will permit to reach the required level of maturity to face the production of B23 passive components (feed, ortho-mode transducer, wave-guide routing) on the basis of the activities already performed in Italy. The study will permit to reduce risks and costs by identifying and solving in advance, during the development phase, major criticalities of performance and technology. Moreover, whatever the decision will be, either to implement Band 2 (B2) or Band 2+3 (B23) in ALMA, it was well demonstrated that the performances of B23 horn and OMT prototypes are competitive with the B2 passive components currently being developed by North America (NA) partners. This opens the way also to a hybrid scenario in which the B2 cartridge (if constructed), right away, could be based on passive components operating on the wider B23 band: such a choice could represent the roadmap for any future hardware upgrades. In this respect this proposal will be of major importance also in the case that a B2 cartridge is base lined for ALMA. 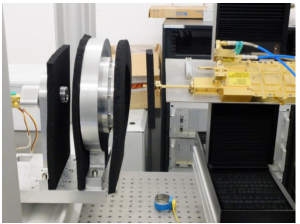