All 66 ALMA antennas now handed over to the observatory

The final antenna for the Atacama Large Millimeter/submillimeter Array (ALMA) project has just been handed over to the ALMA Observatory. The 12-metre-diameter dish was manufactured by the European AEM Consortium and also marks the successful delivery of a total of 25 European antennas — the largest ESO contract so far.

The antenna is the 66th and final antenna to be delivered to the observatory. North America has provided 25 12-metre antennas, while East Asia has delivered 16 (four 12-metre and twelve 7-metre). By the end of 2013, all 66 ultra-precise millimetre/submillimetre-wave radio antennas are expected to be working together as one telescope, in an array that will stretch for up to 16 kilometres across the Chajnantor Plateau in the Atacama Desert of northern Chile.

The ALMA Observatory was inaugurated by the President of Chile, Sebastián Piñera, in March 2013 (eso1312). That event marked the completion of all the major systems of the giant telescope and the formal transition from a construction project to a fully fledged observatory.

This delivery of the last antenna now completes the ALMA antenna construction phase [1] and provides all 66 antennas for science use, marking the beginning of a new era of discoveries in astronomy. “This is an important milestone for the ALMA Observatory since it enables astronomers in Europe and elsewhere to use the complete ALMA telescope, with its full sensitivity and collecting area,” says Wolfgang Wild, the European ALMA Project Manager.

The handover of the final European antenna marks the successful completion of the largest ESO contract so far. The contract with the AEM Consortium [2] covered the design, manufacture, transport and on-site integration of the 25 antennas.

ALMA helps astronomers to answer important questions about our cosmic origins. The telescope observes the Universe using light with millimetre and submillimetre wavelengths, between infrared light and radio waves in the electromagnetic spectrum. Light at these wavelengths comes from some of the coldest, but also from some of the most distant, objects in the cosmos. These include cold clouds of gas and dust where new stars are being born, and remote galaxies towards the edge of the observable Universe.

The Universe is relatively unexplored at submillimetre wavelengths, as the telescopes need extremely dry atmospheric conditions, such as those at Chajnantor, many large antennas and advanced detector technology. Even before completion ALMA has already been used extensively for science projects and has shown great potential with the publication of many exciting science results (see eso1336, eso1334, eso1333, eso1331, eso1325, eso1318, eso1313 and eso1234).

[1] ESO is also responsible for the construction of the Residencia where visiting staff will be accommodated. 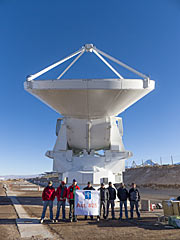 PR Video eso1342a
The final ALMA antenna is handed over to the observatory
Send us your comments!
Subscribe to receive news from ESO in your language
Accelerated by CDN77
Terms & Conditions