A spectacular new image of the Sculptor Galaxy (NGC 253) has been taken with the ESO VISTA telescope at the Paranal Observatory in Chile as part of one of its first major observational campaigns. By observing in infrared light VISTA’s view is less affected by dust and reveals a myriad of cooler stars as well as a prominent bar of stars across the central region. The VISTA image provides much new information on the history and development of the galaxy.

The Sculptor Galaxy (NGC 253) lies in the constellation of the same name and is one of the brightest galaxies in the sky. It is prominent enough to be seen with good binoculars and was discovered by Caroline Herschel from England in 1783. NGC 253 is a spiral galaxy that lies about 13 million light-years away. It is the brightest member of a small collection of galaxies called the Sculptor Group, one of the closest such groupings to our own Local Group of galaxies. Part of its visual prominence comes from its status as a starburst galaxy, one in the throes of rapid star formation. NGC 253 is also very dusty, which obscures the view of many parts of the galaxy (eso0902). Seen from Earth, the galaxy is almost edge on, with the spiral arms clearly visible in the outer parts, along with a bright core at its centre.

VISTA, the Visible and Infrared Survey Telescope for Astronomy, the latest addition to ESO’s Paranal Observatory in the Chilean Atacama Desert, is the world’s largest survey telescope. After being handed over to ESO at the end of 2009 (eso0949) the telescope was used for two detailed studies of small sections of the sky before it embarked on the much larger surveys that are now in progress. One of these “mini surveys” was a detailed study of NGC 253 and its environment.

As VISTA works at infrared wavelengths it can see right through most of the dust that is such a prominent feature of the Sculptor Galaxy when viewed in visible light. Huge numbers of cooler stars that are barely detectable with visible-light telescopes are now also seen. The VISTA view reveals most of what was hidden by the thick dust clouds in the central part of the disc and allows a clear view of a prominent bar of stars across the nuclear region — a feature that is not seen in visible light pictures. The majestic spiral arms now spread over the whole disc of the galaxy.

The spectacular viewing conditions VISTA shares with ESO’s Very Large Telescope (VLT), located on the next mountain peak, also allow VISTA images to be exceptionally sharp for a ground-based telescope.

With this powerful instrument at their command astronomers wanted to peel away some of the mysteries of the Sculptor Galaxy. They are studying the myriad of cool red giant stars in the halo that surrounds the galaxy, measuring the composition of some of NGC 253’s small dwarf satellite galaxies, and searching for as yet undiscovered new objects such as globular clusters and ultra-compact dwarf galaxies that would otherwise be invisible without the deep VISTA infrared images. Using the unique VISTA data they plan to map how the galaxy formed and has evolved. 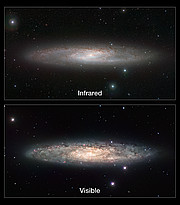 PR Video eso1025b
IR/visible crossfade of the Sculptor Galaxy (NGC 253)
Send us your comments!
Subscribe to receive news from ESO in your language
Accelerated by CDN77
Terms & Conditions