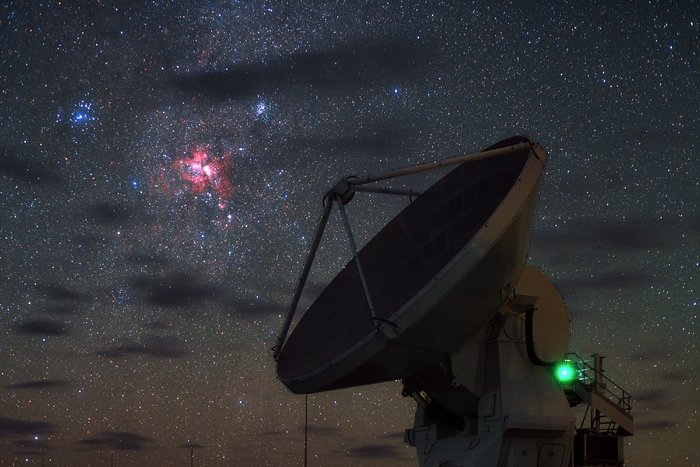 In this wonderful high definition, singe-exposure image taken during the ESO Ultra HD Expedition, three deep sky objects seem to shine in front of the dish of one of the Atacama Large Millimeter/submillimeter Array (ALMA) high-precision antennas.

The most striking feature is the reddish Carina Nebula, also known as NGC 3372. It is a large cloud of gas, mostly hydrogen, in which star formation has recently taken place. The short-lived massive blue stars forged within the nebula emit copious amounts of ultraviolet radiation, which then ionises the surrounding gas and causes the hydrogen atoms to glow with a characteristic red colour. Eventually supernova explosions and strong stellar winds from the most massive stars will disperse the gas of the Carina Nebula, leaving behind one or more clusters of stars.

Two such star clusters, known as NGC 3532 and IC 2602, can be seen respectively to the top right and top left of the Carina Nebula in this image.

The three celestial objects belong to the constellation of Carina (The Keel) and were first catalogued by the French astronomer Nicolas Louis de Lacaille. They look close to one another in this image, but actually their distances from us are very different. IC 2602 lies less than 500 light-years from Earth, NGC 3532 is around 1300 light-years away and the Carina Nebula is thought to lie up to 10 000 light-years away.