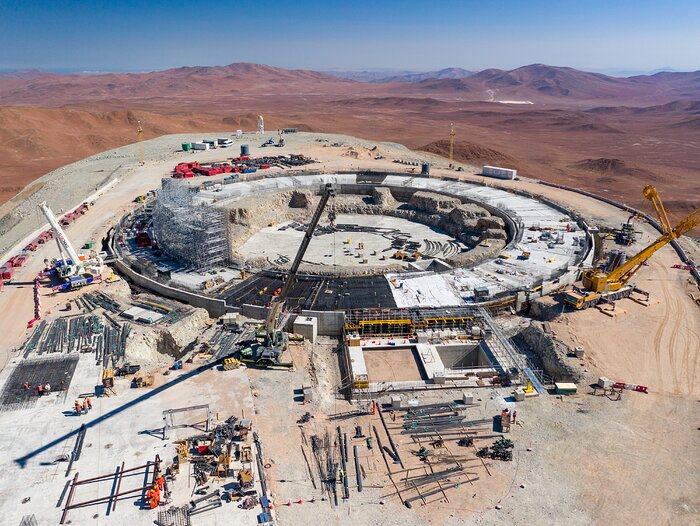 Construction on the world’s biggest eye on the sky, ESO’s Extremely Large Telescope (ELT) is making progress! After a significant slow-down of the building works due to the COVID-19 pandemic — including almost a year of complete site closure — works resumed in mid-2021. As this image from January 2022 shows, the foundations of the mammoth 39-m telescope have been laid, taking us one step closer to uncovering some of the most elusive mysteries of the Universe.

The first forms of the ELT’s spectacular dome are taking shape. The immense structure will be about 80 metres high, with a diameter of about 88 metres, roughly equivalent to the area of a football pitch. To the left you can see the scaffolding and the first formwork of the dome’s pier. The pier will be surrounded by a circular auxiliary building, and its concrete foundation is almost complete. The various electrical, thermal, and hydraulic plants used to operate the ELT will be housed here. The entire structure will rest on shock absorbers, already installed and aligned, to protect against major earthquakes and other vibrations.

In front of the dome, next to where the entrance will be, the eagle-eyed observer can spot a deep pit, which will host a special tower to test and calibrate the telescope’s M4 mirror. This mirror, which is a fundamental component of the adaptive optics system of the ELT, can be quickly deformed to correct for turbulence in the Earth’s atmosphere, as well as vibrations caused by the telescope’s motion and the wind. When finished, this will be the largest adaptive mirror ever made for a telescope, allowing ESO’s ELT to see the Universe in unprecedented detail.