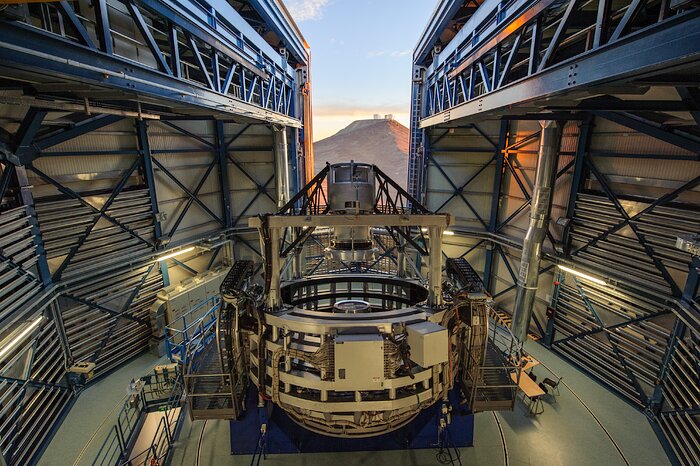 From its dome on Cerro Paranal in Chile’s Atacama desert, the ESO-operated Visible and Infrared Survey Telescope for Astronomy (VISTA) enjoys a stunning view of not only the majestic southern heavens, but also of the nearby mountainous peak, home to ESO’s Very Large Telescope (VLT).

Conceived and developed by a consortium of 18 universities in the United Kingdom, VISTA is the world’s largest telescope entirely devoted to mapping the sky in infrared light. It carries out six public surveys taking up the majority of its observing time. The goal is to discover objects such as brown dwarfs, variable stars and ancient quasars, shed new light on fields such as the nature of dark matter and galactic structures, and even help create a 3D map of about five percent of the entire observable Universe.

But why observe in the infrared? Because it allows VISTA not only to admire the cool side of the cosmos — cold objects often shine brighter at these wavelengths — but also to peer at some of the most remote celestial bodies. These are so distant that, due to the expansion of the Universe, the visible light they emitted has stretched towards longer infrared wavelengths over its journey to us. Last but not least, infrared light is not blocked by the thick, giant clouds of dust scattered in space, allowing astronomers to study objects that would otherwise remain hidden.