A team of astronomers have identified the first direct evidence that groups of stars can tear apart their planet-forming disc, leaving it warped and with tilted rings. This new research suggests exotic planets, not unlike Tatooine in Star Wars, may form in inclined rings in bent discs around multiple stars. The results were made possible thanks to observations with the European Southern Observatory’s Very Large Telescope (ESO’s VLT) and the Atacama Large Millimeter/submillimeter Array (ALMA).

Our Solar System is remarkably flat, with the planets all orbiting in the same plane. But this is not always the case, especially for planet-forming discs around multiple stars, like the object of the new study: GW Orionis. This system, located just over 1300 light-years away in the constellation of Orion, has three stars and a deformed, broken-apart disc surrounding them.

“Our images reveal an extreme case where the disc is not flat at all, but is warped and has a misaligned ring that has broken away from the disc,” says Stefan Kraus, a professor of astrophysics at the University of Exeter in the UK who led the research published today in the journal Science. The misaligned ring is located in the inner part of the disc, close to the three stars.

The new research also reveals that this inner ring contains 30 Earth-masses of dust, which could be enough to form planets. “Any planets formed within the misaligned ring will orbit the star on highly oblique orbits and we predict that many planets on oblique, wide-separation orbits will be discovered in future planet imaging campaigns, for instance with the ELT,” says team member Alexander Kreplin of the University of Exeter, referring to ESO’s Extremely Large Telescope, which is planned to start operating later this decade. Since more than half the stars in the sky are born with one or more companions, this raises an exciting prospect: there could be an unknown population of exoplanets that orbit their stars on very inclined and distant orbits.

To reach these conclusions, the team observed GW Orionis for over 11 years. Starting in 2008, they used the AMBER and later the GRAVITY instruments on ESO’s VLT Interferometer in Chile, which combines the light from different VLT telescopes, to study the gravitational dance of the three stars in the system and map their orbits. “We found that the three stars do not orbit in the same plane, but their orbits are misaligned with respect to each other and with respect to the disc,” says Alison Young of the Universities of Exeter and Leicester and a member of the team.

They also observed the system with the SPHERE instrument on ESO’s VLT and with ALMA, in which ESO is a partner, and were able to image the inner ring and confirm its misalignment. ESO’s SPHERE also allowed them to see, for the first time, the shadow that this ring casts on the rest of the disc. This helped them figure out the 3D shape of the ring and the overall disc.

The international team, which includes researchers from the UK, Belgium, Chile, France and the US, then combined their exhaustive observations with computer simulations to understand what had happened to the system. For the first time, they were able to clearly link the observed misalignments to the theoretical “disc-tearing effect”, which suggests that the conflicting gravitational pull of stars in different planes can warp and break their discs.

Their simulations showed that the misalignment in the orbits of the three stars could cause the disc around them to break into distinct rings, which is exactly what they see in their observations. The observed shape of the inner ring also matches predictions from numerical simulations on how the disc would tear.

Interestingly, another team who studied the same system using ALMA believe another ingredient is needed to understand the system. “We think that the presence of a planet between these rings is needed to explain why the disc tore apart,” says Jiaqing Bi of the University of Victoria in Canada who led a study of GW Orionis published in The Astrophysical Journal Letters in May this year. His team identified three dust rings in the ALMA observations, with the outermost ring being the largest ever observed in planet-forming discs.

Future observations with ESO’s ELT and other telescopes may help astronomers fully unravel the nature of GW Orionis and reveal young planets forming around its three stars.

This research was presented in the paper “A triple star system with a misaligned and warped circumstellar disk shaped by disk tearing” to appear in Science (doi: 10.1126/science.aba4633). 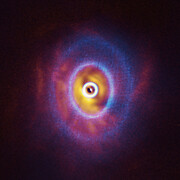 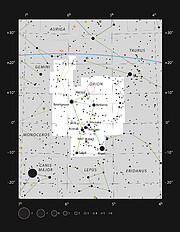 PR Image eso2014d
GW Orionis in the constellation of Orion

PR Video eso2014d
How GW Orionis got its ring (computer simulation)
Send us your comments!
Subscribe to receive news from ESO in your language
Accelerated by CDN77
Terms & Conditions