Astronomers have used ALMA to capture a strikingly beautiful view of a delicate bubble of expelled material around the exotic red star U Antliae. These observations will help astronomers to better understand how stars evolve during the later stages of their life-cycles.

In the faint southern constellation of Antlia (The Air Pump) the careful observer with binoculars will spot a very red star, which varies slightly in brightness from week to week. This very unusual star is called U Antliae and new observations with the Atacama Large Millimeter/submillimeter Array (ALMA) are revealing a remarkably thin spherical shell around it.

U Antliae [1] is a carbon star, an evolved, cool and luminous star of the asymptotic giant branch type. Around 2700 years ago, U Antliae went through a short period of rapid mass loss. During this period of only a few hundred years, the material making up the shell seen in the new ALMA data was ejected at high speed. Examination of this shell in further detail also shows some evidence of thin, wispy gas clouds known as filamentary substructures.

This spectacular view was only made possible by the unique ability to create sharp images at multiple wavelengths that is provided by the ALMA radio telescope, located on the Chajnantor Plateau in Chile’s Atacama Desert. ALMA can see much finer structure in the U Antliae shell than has previously been possible.

The new ALMA data are not just a single image; ALMA produces a three-dimensional dataset  (a data cube) with each slice being observed at a slightly different wavelength. Because of the Doppler Effect, this means that different slices of the data cube show images of gas moving at different speeds towards or away from the observer. This shell is also remarkable as it is very symmetrically round and also remarkably thin. By displaying the different velocities we can cut this cosmic bubble into virtual slices just as we do in computer tomography of a human body.

Understanding the chemical composition of the shells and atmospheres of these stars, and how these shells form by mass loss, is important to properly understand how stars evolve in the early Universe and also how galaxies evolved. Shells such as the one around U Antliae show a rich variety of chemical compounds based on carbon and other elements. They also help to recycle matter, and contribute up to 70% of the dust between stars.

[1] The name U Antliae reflects the fact that it is the fourth star that changes its brightness to be found in the constellation of Antlia (The Air Pump). The naming of such variable stars followed a complicated sequence as more and more were found and is explained here.

This research was presented in a paper entitled “Rings and filaments. The remarkable detached CO shell of U Antliae”, by F. Kerschbaum et al., to appear in the journal Astronomy & Astrophysics. 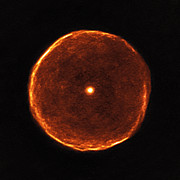 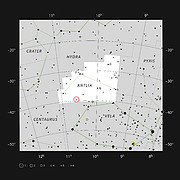 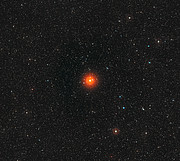 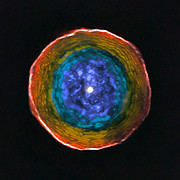 PR Video eso1730c
Tomography of a cosmic bubble
Send us your comments!
Subscribe to receive news from ESO in your language
Accelerated by CDN77
Terms & Conditions