This intriguing new picture from ESO’s Very Large Telescope shows the glowing green planetary nebula IC 1295 surrounding a dim and dying star located about 3300 light-years away in the constellation of Scutum (The Shield). This is the most detailed picture of this object ever taken.

Stars the size of the Sun end their lives as tiny and faint white dwarf stars. But as they make the final transition into retirement their atmospheres are blown away into space. For a few tens of thousands of years they are surrounded by the spectacular and colourful glowing clouds of ionised gas known as planetary nebulae.

This new image from the VLT shows the planetary nebula IC 1295, which lies in the constellation of Scutum (The Shield). It has the unusual feature of being surrounded by multiple shells that make it resemble a micro-organism seen under a microscope, with many layers corresponding to the membranes of a cell.

These bubbles are made out of gas that used to be the star’s atmosphere. This gas has been expelled by unstable fusion reactions in the star’s core that generated sudden releases of energy, like huge thermonuclear belches. The gas is bathed in strong ultraviolet radiation from the aging star, which makes the gas glow. Different chemical elements glow with different colours and the ghostly green shade that is prominent in IC 1295 comes from ionised oxygen.

At the centre of the image, you can see the burnt-out remnant of the star’s core as a bright blue-white spot at the heart of the nebula. The central star will become a very faint white dwarf and slowly cool down over many billions of years.

Stars with masses like the Sun and up to eight times that of the Sun, will form planetary nebulae as they enter the final phase of their existence. The Sun is 4.6 billion years old and it will likely live another four billion years.

Despite the name, planetary nebulae have nothing to do with planets. This descriptive term was applied to some early discoveries because of the visual similarity of these unusual objects to the outer planets Uranus and Neptune, when viewed through early telescopes, and it has been catchy enough to survive [1]. These objects were shown to be glowing gas by early spectroscopic observations in the nineteenth century.

[1] Even early observers such as William Herschel, who discovered many planetary nebulae and speculated about their origin and composition, knew that they weren’t actually planets orbiting the Sun as they did not move relative to the surrounding stars. 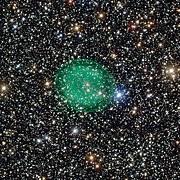 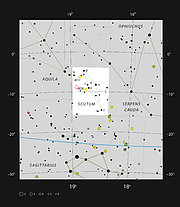 PR Video eso1317a
Zooming in on the planetary nebula IC 1295
Send us your comments!
Subscribe to receive news from ESO in your language
Accelerated by CDN77
Terms & Conditions