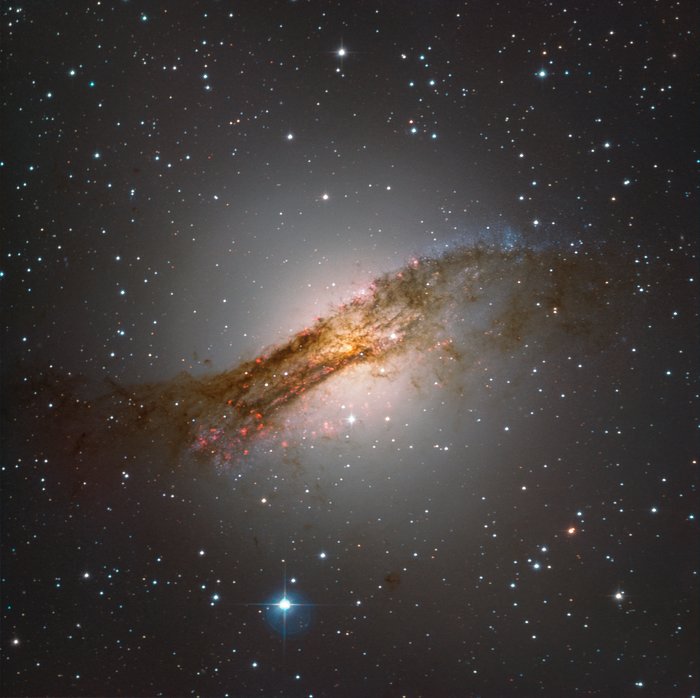 This spectacular portrait of the Centaurus A galaxy was captured under clear skies by the newest operational ESO observatory, SPECULOOS (Search for habitable Planets EClipsing ULtra-cOOl Stars), located at the Paranal Observatory in Chile. The state of the art observatory is fitted an array of four one-metre telescopes, each named after one of the four Galilean moons. The SPECULOOS telescopes are neighbours of two of ESO’s most powerful telescopes, the Very Large Telescope (VLT) and VISTA. SPECULOOS is set to survey up to ten times more red dwarf stars than the TRAPPIST telescope (located at ESO La Silla Observatory) currently does. It is predicted statistically that it will then find at least twelve solar systems of a similar size to the now famous TRAPPIST-1 system.

The Centaurus A galaxy (NGC 5128)  is one of the brightest galaxies in the southern hemisphere night sky, located in the constellation of Centaurus. It was discovered in 1826 by Scottish astronomer James Dunlop at the former Parramata Observatory. At a distance of 11 million light-years, it is the closest active galactic nucleus (AGN) to us. Astronomers theorise that what was originally an elliptical galaxy collided with a relatively smaller spiral shaped galaxy, giving it the peculiar shape we see now. NGC 5128 has an impressive collection of stars. From this image, you can observe red/pink star-forming regions on the bottom left of the image and young blue star clusters on the top right of the image; with dust lanes captured in stunning detail.

Towards the centre of the galaxy, leftover cosmic dust is slowly being eaten by the supermassive black hole, which has a mass of roughly 100 million solar masses. This accretion of matter results in powerful radio waves being emitted from the AGN.

This image was taken as one of the first light images from the SPECULOOS telescopes. First light images are the very first images that are taken by a telescope when it is being commissioned for science operation to guarantee that it is in good working order and that the images are clear.