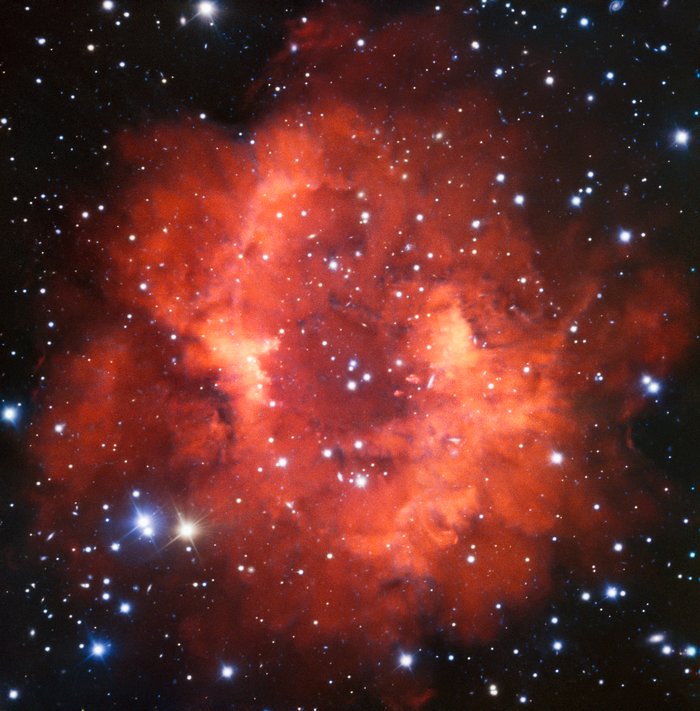 This red-hued cloud of gas is named Abell 24, and is located in the constellation of Canis Minor (The Lesser Dog). It is something known as a planetary nebula — a burst of gas and dust created when a star dies and throws its outer layers into space. Despite the name, planetary nebulae have nothing to do with planets. The term was coined by William Herschel, who also famously discovered Uranus; in a time of low-resolution astronomy, these nebulous objects appeared to resemble giant planets swimming in a dark cosmos.

A Sun-like star spends most of its life converting hydrogen into helium in its core. In its twilight years the star runs out of fuel and becomes unbalanced; it can no longer resist the inward crush of gravity and the core begins to collapse. The temperature in the core rises dramatically while the cooler outer layers expand, causing the entire star to bloat into a red giant. When the Sun begins its transformation into a red giant it will expand to completely engulf the innermost planets and possibly also the Earth, growing to over 250 times its current radius! Strong winds then expel the gaseous outer layers of the star, forming a shell of gas that spreads out into the vastness of space. The red giant's venting atmosphere will eventually expose its hot, luminous remnant core, which will emit fierce ultraviolet radiation and ionise the surrounding gas. This image shows the faint nebulous glow of a stellar swansong — the bright remnant of a long-dead star.

Taken with the VLT’s FORS (FOcal Reducer and Spectrograph) instrument, this image is part of the ESO Cosmic Gems programme, an initiative to produce images of scientifically interesting and visually attractive objects using ESO telescopes for the purposes of education and public outreach. The programme makes use of telescope time that cannot be used for science observations. All data collected may also be suitable for scientific purposes, and are made available to astronomers through ESO’s science archive.