Today, ESO signed an agreement with an international consortium to build and operate MAVIS, a unique instrument to be installed on ESO’s Very Large Telescope (VLT) that will provide images up to three times sharper than the Hubble Space Telescope. MAVIS will tackle a range of research questions, from how the first stars formed 13 billion years ago to how weather changes on the planets and moons of the Solar System.

“MAVIS will be a powerful instrument that will serve a very large number of key science projects,” explains François Rigaut, a professor at the Australian National University who is leading the consortium for MAVIS. “This will include observations of our own Solar System as well as planets around other stars, and the physics of star formation, from the Milky Way to the first star clusters in the Universe.”

MAVIS, which stands for Multi-conjugate-adaptive-optics-Assisted Visible Imager and Spectrograph, will produce images sharper than space telescopes operating today by removing the blur caused by turbulence in the Earth’s atmosphere. To do this, the instrument will make full use of the VLT’s sophisticated Adaptive Optics Facility, which has powerful laser guide stars and an adaptive mirror that can be deformed hundreds of times per second to correct for the atmospheric blur. MAVIS will include two more adaptive mirrors and other systems to better correct these distortions. The ability to deliver corrected images in the visible wavelength range, over a wide field of view, is what makes MAVIS a one-of-a-kind instrument, and means it will be able to observe very faint, distant objects.

The MAVIS consortium is led by the Australian Astronomical Optics (AAO), with the National Institute for Astrophysics (INAF) in Italy being a major partner; the Laboratoire d’Astrophysique (LAM) in France and ESO are also part of the consortium. MAVIS is being designed by two Australian institutes in the AAO consortium — the Australian National University and Macquarie University — representing a significant milestone for ESO’s growing relationship with Australia.

ESO and Australia entered a 10-year strategic partnership in 2017, a partnership that the Australian astronomy community has embraced with enthusiasm. “MAVIS is the result of a fantastic collaboration and shows the potential that becoming an ESO member state holds for Australia and for ESO,” says Richard McDermid, MAVIS project scientist and Associate Professor at Macquarie University. “It will demonstrate that Australia can not only participate in the scientific life of the observatory, but can also be a core player in helping ESO to maintain its leadership in providing unique and competitive instruments.” In return for building MAVIS, the consortium will get guaranteed observing time with the instrument, as well as a financial contribution from ESO for its hardware.

The next few years represent a very exciting time for astronomy. “From space, with the likes of the James Webb Space Telescope, and with ground-based facilities such as ESO’s Extremely Large Telescope, astronomers will explore the Universe in more depth than ever,” says Robin Arsenault, MAVIS manager at ESO. “Delivering data in the visible spectrum, MAVIS is unique and will complement these future large facilities, which are targeted to the near-infrared.”

MAVIS will be installed on the VLT Unit Telescope 4 (Yepun) at ESO’s Paranal Observatory in northern Chile and is expected to start operating in 2027. 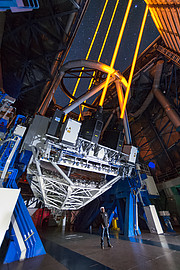