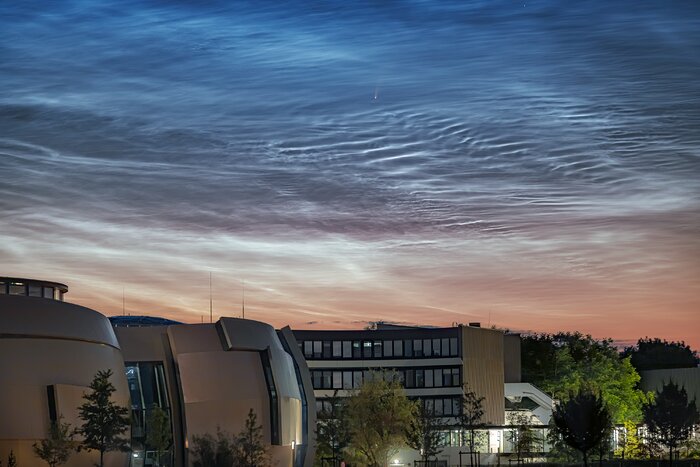 A comet from the outer reaches of the Solar System, nicknamed NEOWISE, was photographed by two ESO staff members — who are also keen astrophotographers — on 8 July 2020 in the skies over the ESO Supernova and ESO Headquarters in Garching, Germany. This rare treat was also accompanied by another night-time phenomena: the very unusual noctilucent clouds — shiny, icy clouds that look remarkably like water ripples in the night sky.

Officially called C/2020 F3, NEOWISE was first discovered by the NASA NEOWISE space mission in March this year. It is expected to dim as the month goes on, but to remain visible to the naked eye throughout July. It will reach its closest point to Earth on 23 July, at a distance of just over 100 million km.

The comet’s spectacular bright tail is caused by heat from the Sun, which is evaporating the outer layers of the icy comet. In fact, NEOWISE has already survived its closest encounter with our Sun, on 3 July 2020. There is still a risk that it will fracture as it slingshots away from the Sun’s heat. If it remains intact, it will journey back to the icy outer regions of our Solar System, and is not expected to return for approximately another 6800 years.