The year 2009 was celebrated as the International Year of Astronomy and has proved to be exceptional both for astronomy and for ESO.

At Paranal, ESO’s flagship observatory, the Visible and Infrared Survey Telescope for Astronomy (VISTA) started work at the end of 2009. Its first stunning images have been released and promise plenty of superb achievements for the year to come (ESO eso0949).

Also at Paranal, ESO’s Very Large Telescope (VLT), the world’s most advanced ground-based observatory, was further enhanced. The VLT welcomed the first of its second generation instruments, X-shooter, which is able to record the entire visible-light spectrum of a celestial object in a single shot (ESO eso0920).

One of X-shooter’s targets will be gamma-ray bursts, the most powerful explosions taking place in the Universe. The VLT has allowed astronomers to determine the distance of a gamma-ray burst that emitted light only about 600 million years after the Big Bang. It is currently the most distant known object in the Universe (ESO eso0917).

The VLT Interferometer (VLTI) is fully exploiting its ability to combine the light collected by two or more telescopes, creating a virtual giant telescope able to distinguish even finer details than the individual VLT telescopes. Emulating a virtual telescope about 100 metres across, the VLTI was able to create one of the sharpest colour images ever made (ESO eso0906).

Another instrument mounted on the VLT, the Multi-conjugate Adaptive Optics Demonstrator (MAD), allowed astronomers to reveal unprecedented details in one of the oldest clusters of stars in the Milky Way, which is most likely one of the primordial building blocks of the galactic Bulge (ESO eso0945), as well as in one very young and crowded star cluster (ESO eso0947). Never before has such a large patch of sky been imaged using adaptive optics.

Adaptive optics instruments monitor the atmospheric turbulence and correct images taken on the ground in real time, so they can be almost as sharp as if taken from space: such precise corrections require a camera that works at extremely high speeds, up to a thousand images per second. This is now achievable with the new ultra-fast camera OCam, developed in a collaboration between ESO and three French laboratories (ESO eso0922). This technology will be essential for ESO’s planned 42-metre European Extremely Large Telescope.

The world’s foremost planet-hunting instrument, HARPS, located at ESO’s La Silla Observatory, contributed significantly to increasing the count of exoplanets known to date, a number now well above 400 (ESO eso0939). This collection now includes, thanks to HARPS, the lightest exoplanet ever discovered, with a mass only about twice that of our terrestrial home (ESO eso0915), and two super-Earth planets, for which both the mass and radius have been measured, allowing astronomers to understand their inner structure better (ESO eso0933 and eso0950).

ESO’s La Silla Observatory celebrated its 40th anniversary this year. When it began operations it was the largest astronomical observatory of its time, and it is still one of the most scientifically productive in ground-based astronomy (ESO eso0912). In addition to performing unique science, the telescopes at La Silla continue to deliver breathtaking images of stellar nurseries (ESO eso0905, eso0925, eso0926, eso0929 and eso0930), dying stars (ESO eso0907) and galaxies (ESO eso0931 and ESO eso0938).

Significant advances were made in the ALMA project. It is literally progressing towards new heights, as the first 12-metre antennas have been carried up to the Array Operations Site at an altitude of 5000 metres on the Chajnantor plateau (ESO eso0935) and the first interferometric measurements of radio signals, or “fringes”, of an astronomical source have been obtained using two antennas. The Atacama Pathfinder Experiment (APEX) telescope also keeps on achieving outstanding results, such as mapping the dust content of the inner regions of the Milky Way in unprecedented detail (ESO eso0924) or imaging the jets and lobes emanating from the central black hole of the active galaxy Centaurus A (ESO eso0903).

Within the context of the International Year of Astronomy 2009, ESO organised “Around the World in 80 Telescopes”, a live 24-hour free public video webcast linking together, for the first time, the largest and foremost observatories on Earth and in space (ESO eso0913). ESO, together with the Association of French Language Planetariums (APLF), produced a 30-minute planetarium show, In Search of our Cosmic Origins, centred on the Atacama Large Millimeter/submillimeter Array (ALMA) project (ESO eso0909). ESO also produced the GigaGalaxy Zoom project, releasing three giant images of the Milky Way, which connect the sky as seen by the unaided eye with that seen by hobby and professional astronomers (ESO eso0932, eso0934 and eso0936). ESO teamed up with partners to promote and support GalileoMobile, an itinerant expedition to bring the wonder and excitement of astronomy to young people in Chile, Bolivia and Peru (ESO eso0937). 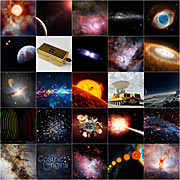 PR Image ann1001a
ESO highlights in 2009
Send us your comments!
Subscribe to receive news from ESO in your language
Accelerated by CDN77
Terms & Conditions