A Look into the Hellish Cradles of Suns and Solar Systems

New images released today by ESO delve into the heart of a cosmic cloud, called RCW 38, crowded with budding stars and planetary systems. There, young stars bombard fledgling suns and planets with powerful winds and blazing light, helped in their task by short-lived, massive stars that explode as supernovae. In some cases, this onslaught cooks away the matter that may eventually form new solar systems. Scientists think that our own Solar System emerged from such an environment.

The dense star cluster RCW 38 glistens about 5500 light years away in the direction of the constellation Vela (the Sails). Like the Orion Nebula Cluster, RCW 38 is an “embedded cluster”, in that the nascent cloud of dust and gas still envelops its stars. Astronomers have determined that most stars, including the low mass, reddish ones that outnumber all others in the Universe, originate in these matter-rich locations. Accordingly, embedded clusters provide scientists with a living laboratory in which to explore the mechanisms of star and planetary formation.

“By looking at star clusters like RCW 38, we can learn a great deal about the origins of our Solar System and others, as well as those stars and planets that have yet to come”, says Kim DeRose, first author of the new study that appears in the Astronomical Journal. DeRose did her work on RCW 38 as an undergraduate student at the Harvard-Smithsonian Center for Astrophysics, USA.

Using the NACO adaptive optics instrument on ESO’s Very Large Telescope [1], astronomers have obtained the sharpest image yet of RCW 38. They focused on a small area in the centre of the cluster that surrounds the massive star IRS2, which glows in the searing, white-blue range, the hottest surface colour and temperatures possible for stars. These dramatic observations revealed that IRS2 is actually not one, but two stars — a binary system consisting of twin scorching stars, separated by about 500 times the Earth–Sun distance.

In the NACO image, the astronomers found a handful of protostars — the faintly luminous precursors to fully realised stars — and dozens of other candidate stars that have eked out an existence here despite the powerful ultraviolet light radiated by IRS2. Some of these gestating stars may, however, not get past the protostar stage. IRS2’s strong radiation energises and disperses the material that might otherwise collapse into new stars, or that has settled into so-called protoplanetary discs around developing stars. In the course of several million years, the surviving discs may give rise to the planets, moons and comets that make up planetary systems like our own.

As if intense ultraviolet rays were not enough, crowded stellar nurseries like RCW 38 also subject their brood to frequent supernovae when giant stars explode at the ends of their lives. These explosions scatter material throughout nearby space, including rare isotopes — exotic forms of chemical elements that are created in these dying stars. This ejected material ends up in the next generation of stars that form nearby. Because these isotopes have been detected in our Sun, scientists have concluded that the Sun formed in a cluster like RCW 38, rather than in a more rural portion of the Milky Way.

“Overall, the details of astronomical objects that adaptive optics reveals are critical in understanding how new stars and planets form in complex, chaotic regions like RCW 38”, says co-author Dieter Nürnberger.

[1] The name “NACO” is a combination of the Nasmyth Adaptive Optics System (NAOS) and the Near-Infrared Imager and Spectrograph (CONICA). Adaptive optics cancels out most of the image-distorting turbulence in Earth’s atmosphere caused by temperature variations and wind.

This research was presented in a paper that appeared in the Astronomical Journal: A Very Large Telescope / NACO study of star formation in the massive embedded cluster RCW 38, by DeRose et al. (2009, AJ, 138, 33-45).

PR Image eso0929a
The region around the massive star IRS2 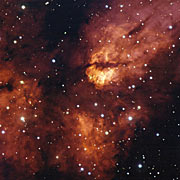 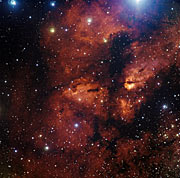 PR Video eso0929a
Zoom in on the embedded star cluster RCW 38
Send us your comments!
Subscribe to receive news from ESO in your language
Accelerated by CDN77
Terms & Conditions