Astronomers have discovered the second super-Earth exoplanet [1] for which they have determined the mass and radius, giving vital clues about its structure. It is also the first super-Earth where an atmosphere has been found. The exoplanet, orbiting a small star only 40 light-years away from us, opens up dramatic new perspectives in the quest for habitable worlds. The planet, GJ1214b, has a mass about six times that of Earth and its interior is likely to be mostly made of water ice. Its surface appears to be fairly hot and the planet is surrounded by a thick atmosphere, which makes it inhospitable for life as we know it on Earth.

In this week’s issue of Nature, astronomers announce the discovery of a planet around the nearby, low-mass star GJ1214 [2]. It is the second time a transiting super-Earth has been detected, after the recent discovery of the planet Corot-7b [3]. A transit occurs when the planet's orbit is aligned so that we see it crossing the face of its parent star. The newly discovered planet has a mass about six times that of our terrestrial home and 2.7 times its radius, falling in size between the Earth and the ice giants of the Solar System, Uranus and Neptune.

Although the mass of GJ1214b is similar to that of Corot-7b, its radius is much larger, suggesting that the composition of the two planets must be quite different. While Corot-7b probably has a rocky core and may be covered with lava, astronomers believe that three quarters of GJ1214b is composed of water ice, the rest being made of silicon and iron.

GJ1214b orbits its star once every 38 hours at a distance of only two million kilometres — 70 times closer to its star than the Earth is to the Sun. “Being so close to its host star, the planet must have a surface temperature of about 200 degrees Celsius, too hot for water to be liquid,” says David Charbonneau, lead author of the paper reporting the discovery.

When the astronomers compared the measured radius of GJ1214b with theoretical models of planets, they found that the observed radius exceeds the models’ predictions: there is something more than the planet’s solid surface blocking the star’s light — a surrounding atmosphere, 200 km thick. “This atmosphere is much thicker than that of the Earth, so the high pressure and absence of light would rule out life as we know it,” says Charbonneau, “but these conditions are still very interesting, as they could allow for some complex chemistry to take place.”

The planet was first discovered as a transiting object within the MEarth project, which follows about 2000 low-mass stars to look for transits by exoplanets [4]. To confirm the planetary nature of GJ1214b and to obtain its mass (using the so-called Doppler method), the astronomers needed the full precision of the HARPS spectrograph, attached to ESO’s 3.6-metre telescope at La Silla. An instrument with unrivalled stability and great precision, HARPS is the world’s most successful hunter for small exoplanets.

“This is the second super-Earth exoplanet for which the mass and radius could be obtained, allowing us to determine the density and to infer the inner structure,” adds co-author Stephane Udry. “In both cases, data from HARPS was essential to characterise the planet.”

“The differences in composition between these two planets are relevant to the quest for habitable worlds,” concludes Charbonneau. If super-Earth planets in general are surrounded by an atmosphere similar to that of GJ1214b, they may well be inhospitable to the development of life as we know it on our own planet.

[1] A super-Earth is defined as a planet between one and ten times the mass of the Earth. An exoplanet is a planet orbiting a star other than the Sun.

[3] Corot-7b is the smallest and fastest-orbiting exoplanet known and has a density quite similar to the Earth's, suggesting a solid, rocky world. Discovered by the CoRoT satellite as a transiting object, its true nature was revealed by HARPS (eso0933).

[4] The MEarth project uses an armada of eight small telescopes each with a diameter of 40 cm, located on top of Mount Hopkins, Arizona, USA. MEarth looks for stars that change brightness. The goal is to find a planet that crosses in front of, or transits, its star. During such a mini-eclipse, the planet blocks a small portion of the star’s light, making it dimmer. NASA’s Kepler mission also uses transits to look for Earth-sized planets orbiting Sun-like stars. However, such systems dim by only one part in ten thousand. The higher precision required to detect the drop means that such worlds can only be found from space. In contrast, a super-Earth transiting a small, red dwarf star yields a greater proportional decrease in brightness and a stronger signal that is detectable from the ground.

This research was presented in a paper appearing this week in Nature (“A Super-Earth Transiting a Nearby Low-Mass Star”, by David Charbonneau et al.). 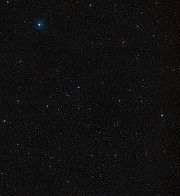 PR Video eso0950c
Zoom in on the star GJ1214
Send us your comments!
Subscribe to receive news from ESO in your language
Accelerated by CDN77
Terms & Conditions