Newly-built planet-finding instrument installed on Very Large Telescope, Chile, begins 100-hour observation of nearby stars Alpha Centauri A and B, aiming to be first to directly image a habitable exoplanet

The instrument, called NEAR (Near Earths in the AlphaCen Region), is designed to hunt for exoplanets in our neighbouring star system, Alpha Centauri, within the “habitable zones” of its two Sun-like stars, where water could potentially exist in liquid form. It has been developed over the last three years and was built in collaboration with the University of Uppsala in Sweden, the University of Liège in Belgium, the California Institute of Technology in the US, and Kampf Telescope Optics in Munich, Germany.

Since 23 May ESO’s astronomers at ESO’s Very Large Telescope (VLT) have been conducting  a ten-day observing run to establish the presence or absence of one or more planets in the star system. Observations will conclude tomorrow, 11 June. Planets in the system (twice the size of Earth or bigger), would be detectable with the upgraded instrumentation. The near- to thermal-infrared range is significant as it corresponds to the heat emitted by a candidate planet, and so enables astronomers to determine whether the planet’s temperature allows liquid water.

Alpha Centauri is the closest star system to our Solar System, at 4.37 light-years (about 25 trillion miles) away. It consists of two Sun-like stars, Alpha Centauri A and B, plus the red dwarf star, Proxima Centauri. Current knowledge of Alpha Centauri’s planetary systems is sparse. In 2016, a team using ESO instruments discovered one Earth-like planet orbiting Proxima Centauri. But Alpha Centauri A and B remain unknown quantities; it is not clear how stable such binary star systems are for Earth-like planets, and the most promising way to establish whether they exist around these nearby stars is to attempt to observe them.

Imaging such planets, however, is a major technical challenge, since the starlight that reflects off them is generally billions of times dimmer than the light coming to us directly from their host stars; resolving a small planet close to its star at a distance of several light-years has been compared to spotting a moth circling a street lamp dozens of miles away. To solve this problem, in 2016 Breakthrough Watch and ESO launched a collaboration to build a special instrument called a thermal infrared coronagraph, designed to block out most of the light coming from the star and optimised to capture the infrared light emitted by the warm surface of an orbiting planet, rather than the small amount of starlight it reflects. Just as objects near to the Sun (normally hidden by its glare) can be seen during a total eclipse, so the coronagraph creates a kind of artificial eclipse of its target star, blocking its light and allowing much dimmer objects in its vicinity to be detected. This marks a significant advance in observational capabilities.

The coronagraph has been installed on one of the VLT’s four 8-metre-aperture telescopes, upgrading and modifying an existing instrument, called VISIR, to optimise its sensitivity to infrared wavelengths associated with potentially habitable exoplanets. It will therefore be able to search for heat signatures similar to that of the Earth, which absorbs energy from the Sun and emits it in the thermal infrared wavelength range. NEAR modifies the existing VISIR instrument in three ways, combining several cutting-edge astronomical engineering achievements. First, it adapts the instrument for coronagraphy, enabling it to drastically reduce the light of the target star and thereby reveal the signatures of potential terrestrial planets. Second, it uses a technique called adaptive optics to strategically deform the telescope’s secondary mirror, compensating for the blur produced by the Earth’s atmosphere. Third, it employs novel chopping strategies that also reduce noise, as well as potentially allowing the instrument to switch rapidly between target stars -— as fast as every 100 milliseconds — maximising the available telescope time.

Pete Worden, Executive Director of the Breakthrough Initiatives, said: “We’re delighted to collaborate with the ESO in designing, building, installing and now using this innovative new instrument. If there are Earth-like planets around Alpha Centauri A and B, that’s huge news for everyone on our planet.”

“ESO is glad to bring its expertise, existing infrastructure, and observing time on the Very Large Telescope to the NEAR project,” commented ESO project manager Robin Arsenault.

“This is a valuable opportunity, as — in addition to its own science goals — the NEAR experiment is also a pathfinder for future planet-hunting instruments for the upcoming Extremely Large Telescope,” says Markus Kasper, ESO’s lead scientist for NEAR.

“NEAR is the first and (currently) only project that could directly image a habitable exoplanet. It marks an important milestone. Fingers crossed — we are hoping a large habitable planet is orbiting Alpha Cen A or B” commented Olivier Guyon, lead scientist for Breakthrough Watch.

“Human beings are natural explorers,” said Yuri Milner, founder of the Breakthrough Initiatives, “It is time we found out what lies beyond the next valley. This telescope will let us gaze across.”

The data from the NEAR experiment are publicly available from the ESO archive under programme ID 2102.C-5011. A pre-processed and condensed package of all the data will be made available shortly after the campaign concludes. In addition, the Python-based high-contrast imaging data reduction tool PynPoint has been adapted to process NEAR data, and will be provided to members of the astronomical community who would like to use the data but do not have their own data reduction tools. https://pynpoint.readthedocs.io/en/latest/near.html

Breakthrough Watch is a global astronomical programme aiming to identify and characterise planets around nearby stars. The programme is run by an international team of experts in exoplanet detection and imaging. https://breakthroughinitiatives.org/initiative/4

The Breakthrough Initiatives are a suite of scientific and technological programmes, founded by Yuri Milner, investigating life in the Universe. Along with Breakthrough Watch, they include Breakthrough Listen, the largest ever astronomical search for signs of intelligent life beyond Earth, and Breakthrough Starshot, the first significant attempt to design and develop a space probe capable of reaching another star.

Yuri Milner founded Mail.ru Group in 1999 and under his leadership it became one of Europe’s leading internet companies. He took that business public in 2010 and founded DST Global to focus on global internet investments. DST Global became one of the world’s leading technology investors and its portfolio has included some of the world's most prominent internet companies, such as Facebook, Twitter, WhatsApp, Snapchat, Airbnb, Spotify,  Alibaba, and others. Yuri lives in Silicon Valley with his family.

Yuri graduated in 1985 with an advanced degree in theoretical physics and subsequently conducted research in quantum field theory. Yuri and his wife Julia, partnered with Sergey Brin, Priscilla Chan and Mark Zuckerberg, Pony Ma, and Anne Wojcicki to fund the Breakthrough Prizes — the world’s largest scientific awards, honouring important, primarily recent, achievements in Fundamental Physics, Life Sciences and Mathematics. In July 2015, together with Stephen Hawking, Yuri launched the $100 million Breakthrough Listen initiative to reinvigorate the search for extraterrestrial intelligence in the Universe, and in April 2016 they launched Breakthrough Starshot — a $100 million research and engineering programme seeking to develop a technology for interstellar travel.

ESO’s Very Large Telescope (VLT) has recently added to its suite of advanced instruments, with a newly modified instrument VISIR (VLT Imager and Spectrometer for mid-Infrared). On 21 May 2019, it made its first observations since being modified to aid in the search for potentially habitable planets in the Alpha Centauri system. 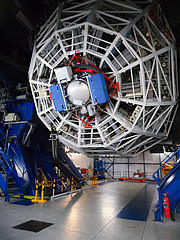 PR Image eso1629e
Artist's impression of the planet orbiting Proxima Centauri
Send us your comments!
Subscribe to receive news from ESO in your language
Accelerated by CDN77
Terms & Conditions