The Dreadful Beauty of Medusa

Astronomers using ESO’s Very Large Telescope in Chile have captured the most detailed image ever taken of the Medusa Nebula. As the star at the heart of this nebula made its transition into retirement, it shed its outer layers into space, forming this colourful cloud. The image foreshadows the final fate of the Sun, which will eventually also become an object of this kind.

This beautiful planetary nebula is named after a dreadful creature from Greek mythology — the Gorgon Medusa. It is also known as Sharpless 2-274 and is located in the constellation of Gemini (The Twins). The Medusa Nebula spans approximately four light-years and lies at a distance of about 1500 light-years. Despite its size it is extremely dim and hard to observe.

Medusa was a hideous creature with snakes in place of hair. These snakes are represented by the serpentine filaments of glowing gas in this nebula. The red glow from hydrogen and the fainter green emission from oxygen gas extends well beyond this frame, forming a crescent shape in the sky. The ejection of mass from stars at this stage of their evolution is often intermittent, which can result in fascinating structures within planetary nebulae.

For tens of thousands of years  the stellar cores of planetary nebulae are surrounded by these spectacularly colourful clouds of gas [1]. Over a further few thousand years the gas slowly disperses into its surroundings. This is the last phase in the transformation of stars like the Sun before ending their active lives as white dwarfs. The planetary nebula stage in the life of a star is a tiny fraction of its total life span — just as the time a child takes to blow a soap bubble and see it drift away is a brief instant compared to a full human life span.

Harsh ultraviolet radiation from the very hot star at the core of the nebula causes atoms in the outward-moving gas to lose their electrons, leaving behind ionised gas. The characteristic colours of this glowing gas can be used to identify objects. In particular, the presence of the green glow from doubly ionised oxygen ([O III]) is used as a tool for spotting planetary nebulae. By applying appropriate filters, astronomers can isolate the radiation from the glowing gas and make the dim nebulae appear more pronounced against a darker background.

When the green [O III] emission from nebulae was first observed, astronomers thought they had discovered a new element that they dubbed nebulium. They later realised that it was simply a rare wavelength of radiation [2] from an ionised form of the familiar element oxygen.

The nebula is also referred to as Abell 21 (more formally PN A66 21), after the American astronomer George O. Abell, who discovered this object in 1955. For some time scientists debated whether the cloud could be the remnant of a supernova explosion. In the 1970s, however, researchers were able to measure the movement and other properties of the material in the cloud and clearly identify it as a planetary nebula [3].

This image uses data from the FOcal Reducer and low dispersion Spectrograph (FORS) instrument attached to the VLT, which were acquired as part of the ESO Cosmic Gems programme [4].

[1] Counterintuitively, the stellar core of the Medusa Nebula is not the bright star in the centre of this image — this is a foreground star called TYC 776-1339-1. Medusa’s central star is a dimmer, bluish star lying just off-centre of the crescent shape and in the right-hand part of this image.

[2] This type of radiation is rare because it is created by a forbidden mechanism — transitions that are forbidden by quantum selection rules, but can still occur with a low probability. The designation [O III] means that the radiation is forbidden (the square brackets) emission from doubly ionised (the III part of the name) oxygen (O).

[3] The expansion velocity of the cloud was found to be about 50 kilometres/second — much lower than would be expected for a supernova remnant.

[4] The ESO Cosmic Gems programme is an outreach initiative to produce images of interesting, intriguing or visually attractive objects using ESO telescopes, for the purposes of education and public outreach. The programme makes use of telescope time that cannot be used for science observations. All data collected may also be suitable for scientific purposes, and are made available to astronomers through ESO’s science archive. 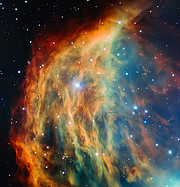 PR Image eso1520b
The Medusa Nebula in the constellation of Gemini 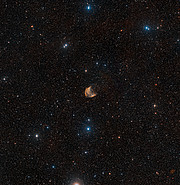 PR Video eso1520a
Zooming in on the Medusa