This image of the nebula NGC 3582, which was captured by the Wide Field Imager on the MPG/ESO 2.2-metre telescope at ESO’s La Silla Observatory in Chile, shows giant loops of gas bearing a striking resemblance to solar prominences. These loops are thought to have been ejected by dying stars, but new stars are also being born within this stellar nursery. These energetic youngsters emit intense ultraviolet radiation that makes the gas in the nebula glow, producing the fiery display shown here.

NGC 3582 is part of a large star-forming region in the Milky Way, called RCW 57. It lies close to the central plane of the Milky Way in the southern constellation of Carina (The Keel of Jason’s ship, the Argo). John Herschel first saw this complex region of glowing gas and dark dust clouds in 1834, during his stay in South Africa.

Some of the stars forming in regions like NGC 3582 are much heavier than the Sun. These monster stars emit energy at prodigious rates and have very short lives that end in explosions as supernovae. The material ejected from these dramatic events creates bubbles in the surrounding gas and dust. This is the probable cause of the loops visible in this picture.

The image was processed by ESO using the observational data identified by Joe DePasquale, from the United States [1], who participated in ESO’s Hidden Treasures 2010 astrophotography competition [2]. The competition was organised by ESO in October–November 2010, for everyone who enjoys making beautiful images of the night sky using astronomical data obtained using professional telescopes.

[1] Joe searched through ESO’s archive and identified datasets that he used to compose his image of NGC 3582, which was the tenth highest ranked entry in the competition, out of almost 100 entries. His original work can be seen here. 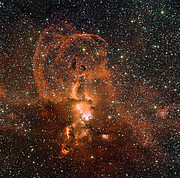 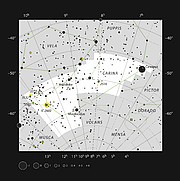 PR Image eso1113b
NGC 3582 in the constellation of Carina 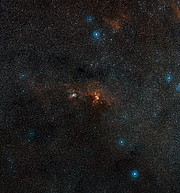 PR Video eso1113a
Zooming in on the star-forming region NGC 3582
Send us your comments!
Subscribe to receive news from ESO in your language
Accelerated by CDN77
Terms & Conditions