After years of successful concealment, the most primitive stars outside our Milky Way galaxy have finally been unmasked. New observations using ESO’s Very Large Telescope have been used to solve an important astrophysical puzzle concerning the oldest stars in our galactic neighbourhood — which is crucial for our understanding of the earliest stars in the Universe.

“We have, in effect, found a flaw in the forensic methods used until now,” says Else Starkenburg, lead author of the paper reporting the study. “Our improved approach allows us to uncover the primitive stars hidden among all the other, more common stars.”

Primitive stars are thought to have formed from material forged shortly after the Big Bang, 13.7 billion years ago. They typically have less than one thousandth the amount of chemical elements heavier than hydrogen and helium found in the Sun and are called “extremely metal-poor stars” [1]. They belong to one of the first generations of stars in the nearby Universe. Such stars are extremely rare and mainly observed in the Milky Way.

Cosmologists think that larger galaxies like the Milky Way formed from the merger of smaller galaxies. Our Milky Way’s population of extremely metal-poor or “primitive” stars should already have been present in the dwarf galaxies from which it formed, and similar populations should be present in other dwarf galaxies. “So far, evidence for them has been scarce,” says co-author Giuseppina Battaglia. “Large surveys conducted in the last few years kept showing that the most ancient populations of stars in the Milky Way and dwarf galaxies did not match, which was not at all expected from cosmological models.”

Element abundances are measured from spectra, which provide the chemical fingerprints of stars [2]. The Dwarf galaxies Abundances and Radial-velocities Team [3] used the FLAMES instrument on ESO’s Very Large Telescope to measure the spectra of over 2000 individual giant stars in four of our galactic neighbours, the Fornax, Sculptor, Sextans and Carina dwarf galaxies. Since the dwarf galaxies are typically 300 000 light years away — which is about three times the size of our Milky Way — only strong features in the spectrum could be measured, like a vague, smeared fingerprint. The team found that none of their large collection of spectral fingerprints actually seemed to belong to the class of stars they were after, the rare, extremely metal-poor stars found in the Milky Way.

The team of astronomers around Starkenburg has now shed new light on the problem through careful comparison of spectra to computer-based models. They found that only subtle differences distinguish the chemical fingerprint of a normal metal-poor star from that of an extremely metal-poor star, explaining why previous methods did not succeed in making the identification.

The astronomers also confirmed the almost pristine status of several extremely metal-poor stars thanks to much more detailed spectra obtained with the UVES instrument on ESO’s Very Large Telescope. “Compared to the vague fingerprints we had before, this would be as if we looked at the fingerprint through a microscope,” explains team member Vanessa Hill. “Unfortunately, just a small number of stars can be observed this way because it is very time consuming.”

“Among the new extremely metal-poor stars discovered in these dwarf galaxies, three have a relative amount of heavy chemical elements between only 1/3000 and 1/10 000 of what is observed in our Sun, including the current record holder of the most primitive star found outside the Milky Way,” says team member Martin Tafelmeyer.

“Not only has our work revealed some of the very interesting, first stars in these galaxies, but it also provides a new, powerful technique to uncover more such stars,” concludes Starkenburg. “From now on there is no place left to hide!”

[1] According to the definition used in astronomy, “metals” are all the elements other than hydrogen and helium. Such metals, except for a very few minor light chemical elements, have all been created by the various generations of stars.

[2] As every rainbow demonstrates, white light can be split up into different colours. Astronomers artificially split up the light they receive from distant objects into its different colours (or wavelengths). However, where we distinguish seven rainbow colours, astronomers map hundreds of finely nuanced colours, producing a spectrum — a record of the different amounts of light the object emits in each narrow colour band. The details of the spectrum — more light emitted at some colours, less light at others — provide tell-tale signs about the chemical composition of the matter producing the light.

[3] The Dwarf galaxies Abundances and Radial-velocities Team (DART) has members from institutes in nine different countries.

This research was presented in a paper to appear in Astronomy and Astrophysics (“The NIR Ca II triplet at low metallicity”, E. Starkenburg et al.). Another paper is also in preparation (Tafelmeyer et al.) that presents the UVES measurements of several primitive stars. 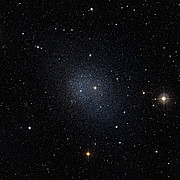 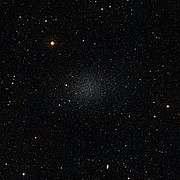 PR Image eso1007b
The Sculptor dwarf galaxy
Send us your comments!
Subscribe to receive news from ESO in your language
Accelerated by CDN77
Terms & Conditions