Following FORS and ISAAC , the first two major VLT instruments to be installed at Paranal (cf. ESO PR Photos 30a-e/98 ), more instruments will soon be added. Good progress is being reported, as the very comprehensive complement of VLT instruments is now constructed at various sites in Europe.

Following FORS and ISAAC, the first two major VLT instruments to be installed at Paranal (cf. ESO Press Photos eso9837), more instruments will soon be added. Good progress is being reported, as the very comprehensive complement of VLT instruments is now constructed at various sites in Europe.

Among these, the UV-Visual Echelle Spectrograph (UVES) will be the third instrument to be installed at Paranal. While FORS and ISAAC go to the UT1, UVES is the first instrument at the UT2, the second telescope of the VLT array.

UVES will add significantly to the scientific capabilities of the VLT. When it becomes available for visiting astronomers in somewhat over one year from now, it will allow observations of even quite faint objects at very high spectral resolution. High-resolution spectroscopy is indeed a "photon starved" discipline that demands much light and it will thus especially profit from the much increased photon collection area of the VLT as compared to 4-m class telescopes.

Among the main astronomical goals with UVES are studies of the intergalactic gas from the absorption spectra of very distant quasars, as well as physical conditions and element abundances in the faintest stars in our own Milky Way galaxy and other galaxies. This instrument will also play a major role in the search for planets around nearby stars by searching for tiny periodic variations in their radial velocities.

The assembly started at the ESO integration and test facility at the Garching Headquarters in June 1998 and will soon be completed; the photos below were obtained during this work. System testing will start later this month and will continue through the first half of 1999. The instrument will then be installed on VLT UT2 in September 1999. After a few months of testing at the telescope, it will be released to the astronomers in January 2000.

Exit ISAAC, enter UVES : This picture was taken in the evening of June 18, 1998 and shows the moment when the lower half of the enclosure of UVES is moved into the Garching integration and test facility, 10 days after the last parts of ISAAC left for Paranal.

The UVES enclosure has a width of over 4 metres, and it passes through the doorway of the assembly hall with only centimetres to spare.

Optical Alignment : In August 1998, opto-mechanical integration and alignment had been almost completed. This picture shows a view of the four-ton optical table on which most of the units are mounted.

The red boxes are motors that position the various filters and other optical components in the telescope beam. The grey structure in the centre houses the large echelle grating, which is the essential component that disperses the light into a spectrum of colours and so permits the study of the physical parameters of the gas emitting the spectrum.

This component is the largest single echelle in the world and was developed specifically for UVES. It consists of a glass plate with 25,000 parallel grooves that have a combined length of 6 km. Each groove is positioned on the plate with an accuracy of a few nanometers (1 nm = 0.000001 mm).

Closing the instrument - the first darkness : This photo was taken mid-August 1998 after all heavy components had been lifted onto the table and the upper half of the enclosure had been mounted. The engineer is operating the motorized lifting system.

In its normal (lowered) position the enclosure provides a light-tight, thermally stable environment for the sensitive optics and detectors inside.

Now towards "first light" in Garching!

Work is now proceeding to install kilometres of cable and to test the software that orchestrates the operation of approximately 100 motors, calibration lamps and sensors, as well as 6 optical detectors.

The main detector that will record the spectra from astronomical objects is a liquid-nitrogen cooled CCD with 16.7 million very sensitive pixels. Each pixel is capable of detecting the arrival of a single photon.

The first "observations" with UVES will be performed while it is still in Garching and on a nearby astronomical source: our Sun! Thus the first photons to reach this instruments will only have been on their way for a little more than 8 minutes, contrary to those that will later be registered with UVES at the UT2 and which may have travelled billions of years through the Universe.

UVES will "see" the Sun less than a month from now. This event will be reported in due time. 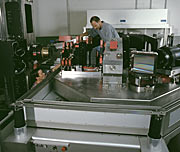 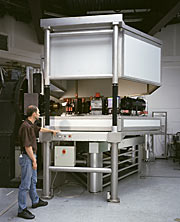 Image eso9839c
UVES at ESO Headquarters
Send us your comments!
Subscribe to receive news from ESO in your language
Accelerated by CDN77
Terms & Conditions