Sorry! This page is not yet available in your preferred language, so we're displaying the original version instead.
European
Southern
Observatory

Behind the scenes at ESO: Showing you the road to the stars
What you’ll discover in this blog post:
Johann Kolb is an expert in adaptive optics — the correction of the distortion of light caused by turbulence in Earth’s atmosphere. Involving advanced technologies like deformable mirrors and powerful lasers, adaptive optics can make images obtained by ESO’s telescopes almost as sharp as those taken in space. After spending 14 years at ESO Headquarters developing and testing new adaptive optics systems, Johann Kolb has spent the last four years at ESO’s Paranal Observatory in Chile installing adaptive optics systems on the telescopes and making sure that these systems perform well for twenty years or more. 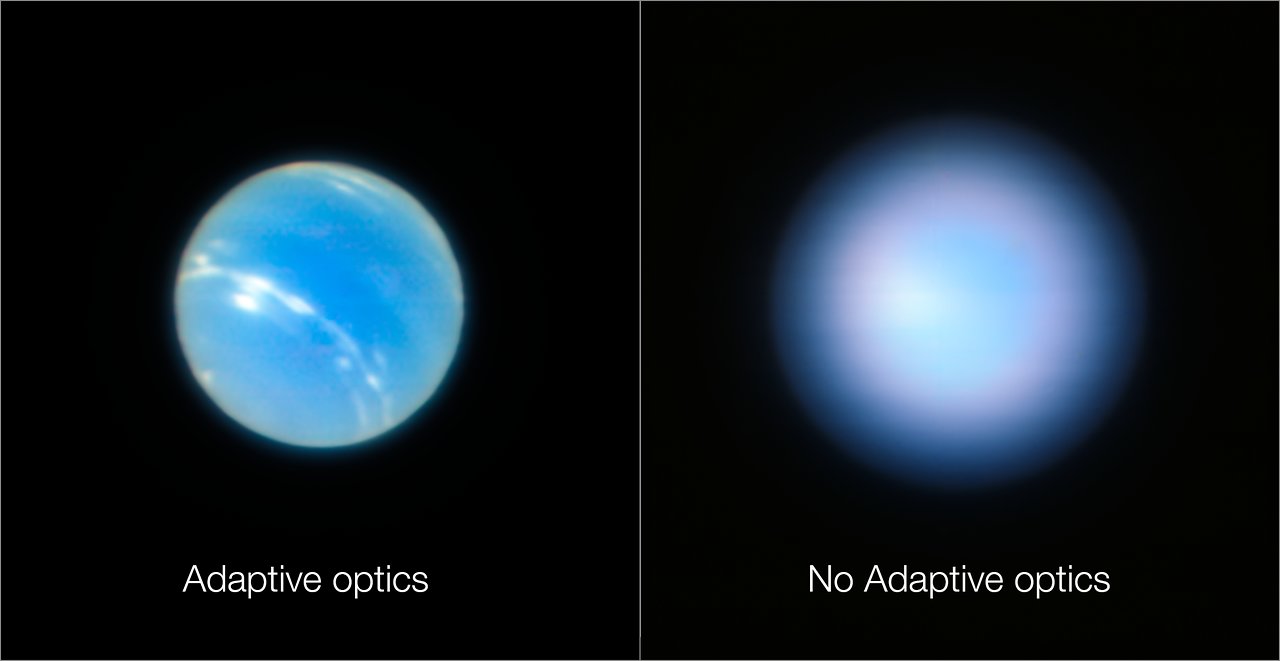 Q. First of all, could you tell us a bit about your role at ESO and what your day to day work looks like?

A. My role is fundamentally to keep an overview of the adaptive optics systems at ESO’s observatories. Turbulence in Earth’s atmosphere reduces the quality of astronomical images and we use adaptive optics on our telescopes to correct for this. The technology has been around for 30 years and we’re now starting to see it everywhere — for example, we currently use 15 adaptive optics systems at Paranal Observatory; there are some differences between them but they all have similar components.

This Adaptive Optics Paranal System Engineer role was created seven years ago because of the increasing number of adaptive optics systems at ESO. It’s mostly about knowledge management — gathering information, considering what problems might arise in the future, and making sure that we learn from current problems. I would say that about half my job is fixing problems, and the other half is planning for the future.

Q. You now work at Paranal Observatory but you spent 14 years developing adaptive optics systems at ESO Headquarters in Germany. How does your current work compare to the work you did at ESO HQ?

A. Indeed, I used to design, align and test adaptive optics systems that were then shipped off to Paranal. Now on the other side I’m involved once each system arrives at the telescope. The first step is to install it in the telescope and make sure it works. The team from HQ sets it up and reproduces the behaviour that it had when being tested in Europe, whilst the Paranal team watches and learns how to make it work best on the sky here in Chile. At these times, I work partly during the night to see how the instrument is working and partly during the day doing data analysis.

In HQ I worked on three or four different adaptive optics systems so I think that experience was essential to allow me to do my job in Paranal well. Although lots of adaptive optics instruments have arrived since I came to Paranal four years ago, there were of course many that arrived before I did. I have spent time learning about how these work, including the commonalities and tools that allow us to analyse them in the same way.

Q. So how exactly does adaptive optics work and why is it so important?

A. The key components are a reference star or a laser that excites sodium atoms around 80 kilometres above Earth’s surface, a wavefront sensor that observes how much the light from the sodium atoms or reference star is being distorted by the motion of air in Earth’s atmosphere, a deformable mirror that changes its shape to correct for the effects of the atmosphere, and a real-time computer that gets information from the wavefront sensor and sends information to the deformable mirror. The ultimate result of adaptive optics is that we better concentrate the photons from whatever scientific target we are observing, so that we can do better science in less observing time. 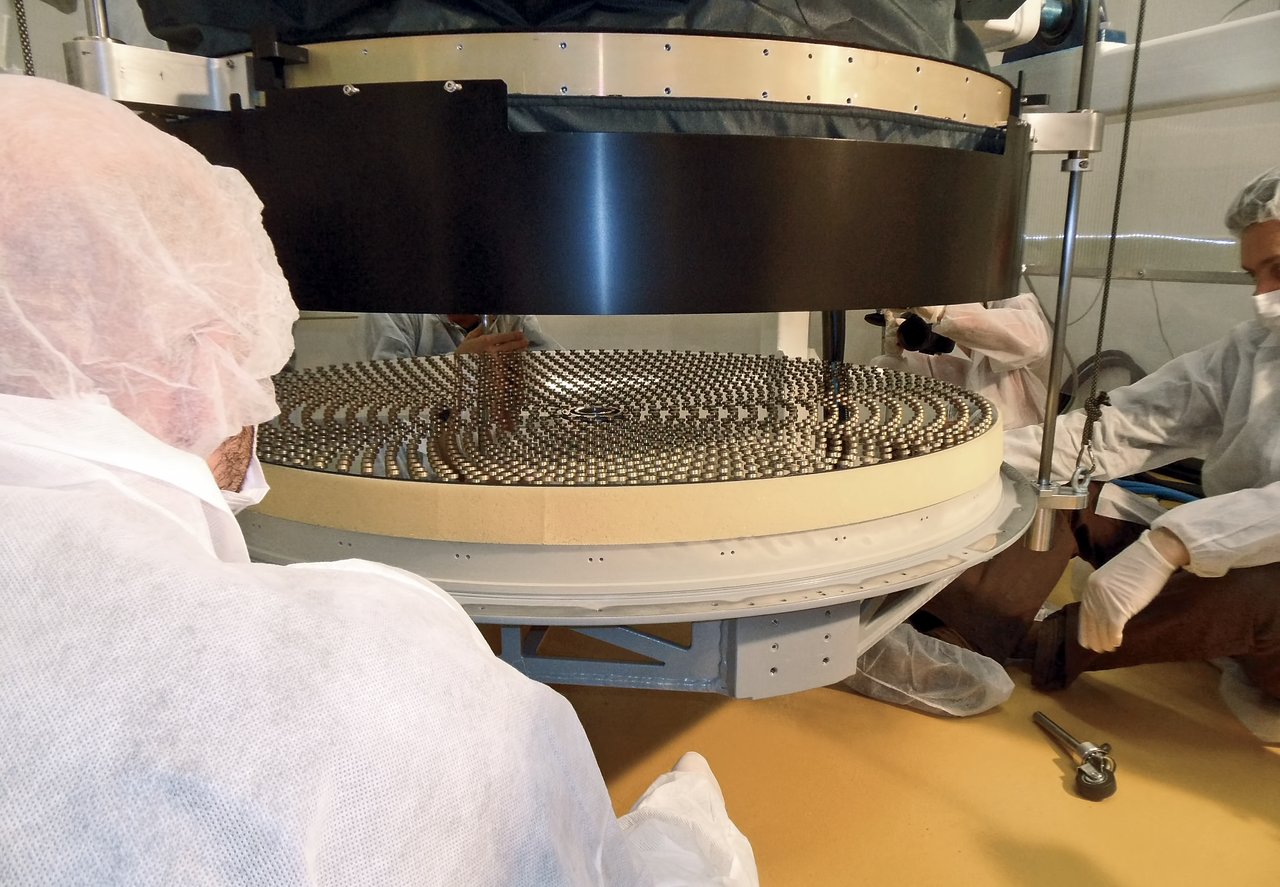 The deformable mirror of the VLT AOF. Magnets are visible glued to the back face of the mirror.
Credit: ESO

One of ESO’s most complex adaptive optics systems is the Adaptive Optics Facility (AOF) on the fourth Unit Telescope of the Very Large Telescope (VLT). This is the famous one that people love to photograph, with the four laser guide stars shooting out. The deformable mirror is 112 centimetres in diameter but just two millimetres thick, and over 1100 little magnets change its shape 1000 times per second to correct for the constantly changing atmospheric turbulence.

Q. You’ve been working at ESO for 18 years. What was adaptive optics technology like when you joined ESO and how have you seen it evolve during that time?

A. The systems that were being installed 18 years ago are still there and we want to make them last ten more years. To be honest there are no major conceptual differences between those systems and the systems we are developing for the upcoming Extremely Large Telescope (ELT) — all the parts talk to each other in much the same way — but there have been some huge improvements in how the different parts work individually and everything has been scaled up a lot.

For example, in the past we could only use reference stars to measure turbulence; knowing that these stars should be points of light, and knowing where their position should be, we can see how much the atmosphere distorts their light and correct for this distortion. The first generation of lasers arrived only around 2006, and they are particularly useful when there are no reference stars near the astronomical target that the telescope is pointing at (we want to find something as close as possible because atmospheric turbulence varies a lot across the sky). The second generation of lasers arrived in 2016, and these are the same as the ones we will use in the ELT. 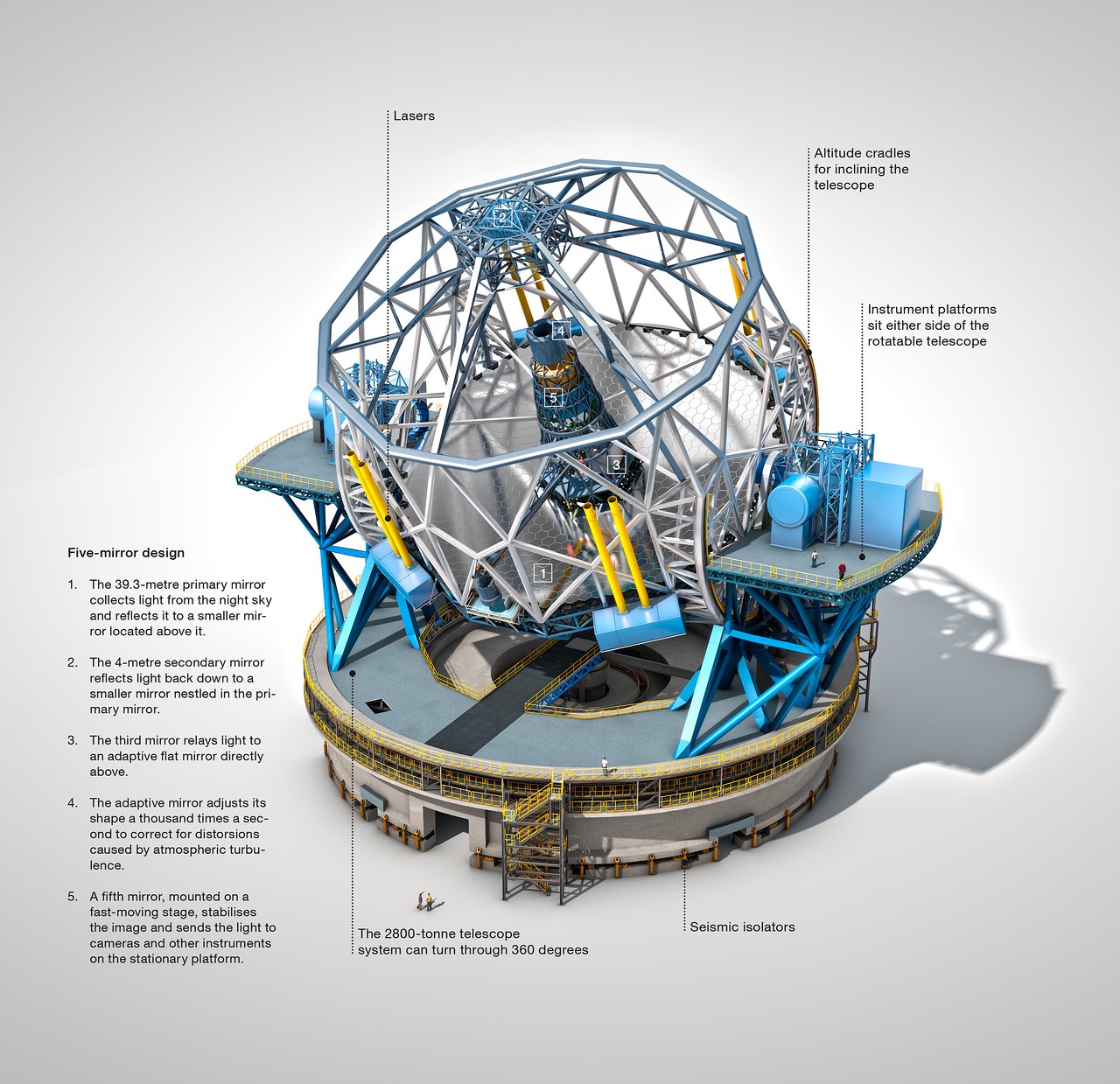 The design for the ELT’s five mirrors.
Credit: ESO

The computers have also of course become much more powerful in that time, meaning that the whole system can work quicker or handle more lasers and more motors to move the deformable mirror at the same time.

One big improvement is that the latest systems use magnets — or magnetic actuators — to deform the mirror, rather than motors that physically puh and pull on the mirror. These magnets keep the thin mirror floating in the air — a bit like those desk globes that float due to a magnet above and below. And the same magnets can be used to pull the mirror in case of an earthquake, to ensure that the mirror doesn’t fall and get broken. Furthermore, twenty years ago deformable mirrors had around 60 of these actuators, whereas we now have 1170 on the AOF.

Q. What will adaptive optics systems for the ELT look like?

A. These will actually look very similar to the AOF. There will be 4–8 lasers, a wavefront sensor and the telescope’s fourth (of five!) mirror will be deformable. But relative to the size of the telescope, the systems will actually be smaller than the AOF. As I mentioned, we have over 1000 actuators for the 8-metre-wide VLT, but we will have over 5000 for the 39-metre wide ELT, which has a surface area more than 20 times that of the VLT. Some of the big challenges will be keeping the system stable and getting everything to work together.

Q. Tell us about something interesting that you've been working on recently?

A. To be honest (don’t tell my astronomer colleagues this!), for my professional needs, stars are just points of light; I don’t care what they’re doing, I just use them as a means to an end. But one of the latest adaptive optics systems is so powerful that it has been possible to analyse turbulence looking at not only reference stars but also the cores of galaxies, planets or moons, for example. This can be particularly useful when astronomers want to look at planets, moons, other galaxies or even quasars distorted by gravitational lenses, because there may be no nearby guide stars.

Another important thing that the adaptive optics development team is working on with ESO’s detector team and European industry is reducing the noise in our detectors. Noise is an unwanted signal — it’s what makes photographs look grainy or blotchy, and we can have the same problem in our adaptive optics systems. So if we reduce the noise we can use fainter and fainter objects to analyse atmospheric turbulence, and we will soon have systems with ten times less noise than their predecessors.

I feel very proud that now, when an operator goes to use AOF they just press a button and everything — all the adaptive optics and science collection — happens automatically.

Q. What would you say is your biggest achievement personally whilst at ESO?

A. One of my favourite projects was working on the Multi-Conjugate Adaptive Optics Demonstrator (MAD) where I was part of a great team working on a very sophisticated prototype that was the first to use several guide stars and several deformable mirrors at the same time. This project actually led to my first ever visit to Paranal when we installed MAD on the VLT in 2007; we spent a couple of months there working on the instrument and it was a fantastic experience.

I then worked on the AOF for ten years, and I feel very proud that now, when an operator goes to use AOF they just press a button and everything — all the adaptive optics and science collection — happens automatically. In the previous generation of adaptive optics instruments, getting an instrument up and running could be twenty minutes of painstaking work! 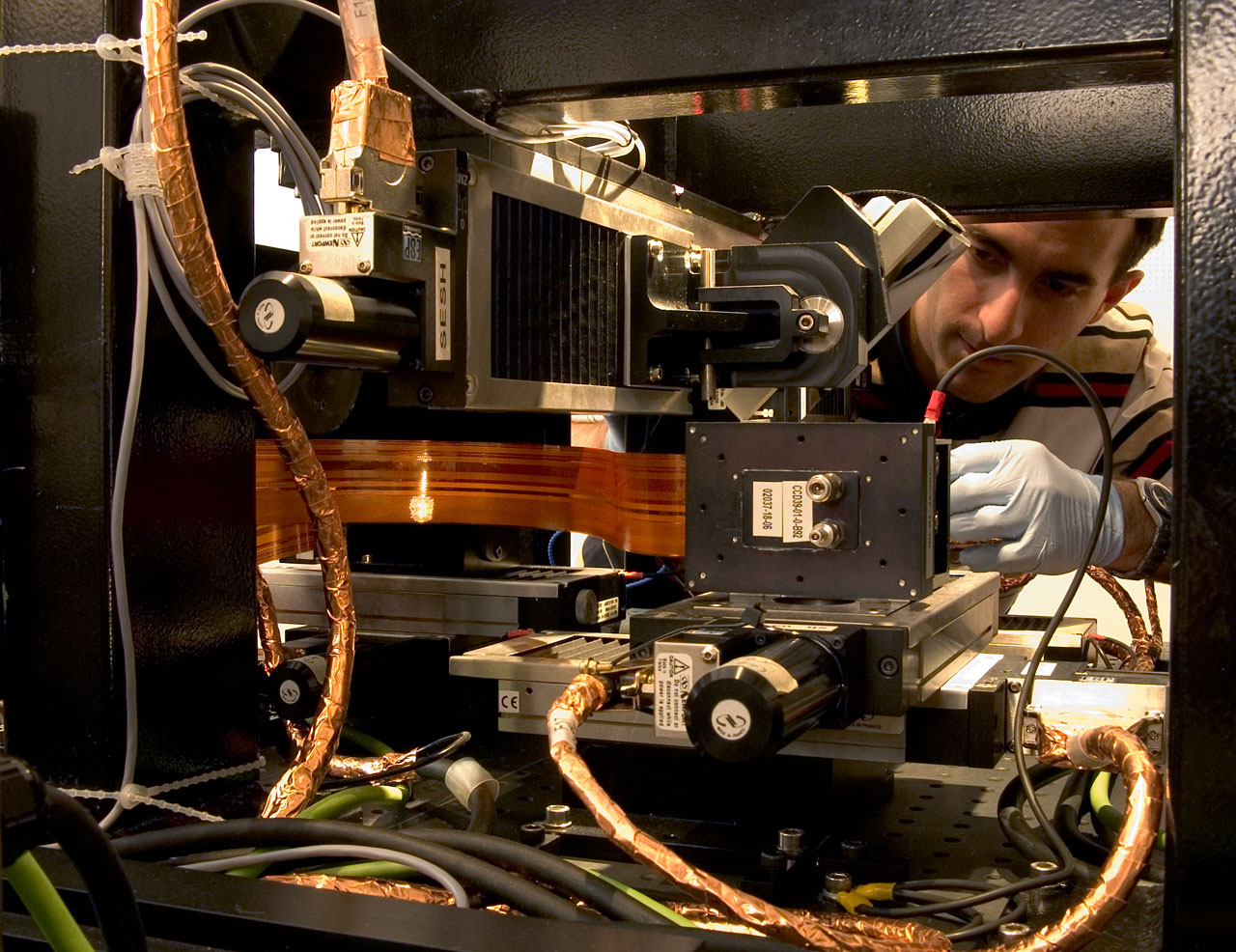 Q. What route did you take to become an adaptive optics engineer?

A. I always knew I would work in science, I just didn’t know which field. I’ve always been an amateur astronomer and at some point I converged to particle physics or astrophysics. I started learning a lot about scientific research which led me in the direction of instrumentation and so I studied for a master’s degree specifically in astronomical instrumentation. I was lucky enough to get offered an internship at ESO where I discovered a fascination for adaptive optics. And here I still am today!

Q. ESO’s observatories have now stopped carrying out observations due to the coronavirus pandemic. Does this pause give you the opportunity to step back and evaluate what you’re doing and what you want to do next?

A. At the moment I am focusing on completing tasks that don’t require being at the observatory, like developing algorithms, reviewing documents, documenting procedures and making plans for the future. As part of this, some questions are arising that I need to use the telescopes to answer, so I will make the most of them when the observatory re-opens again! At that time I will also focus more on the day-to-day challenges that come up.

We had planned to install a couple of new instruments on the VLT over the next months, for example CRIRES+ and NIRPS. When we get back to the observatory we will be busy preparing for and installing them as soon as we can.

Stay tuned for a blog post coming soon on ESO's work on advanced optics for the Extremely Large Telescope (ELT).

Johann Kolb is the Adaptive Optics Paranal System Engineer, working on improving the efficiency and performance of the adaptive optics instruments on the VLT but also at La Silla Observatory and maybe one day for the ELT.