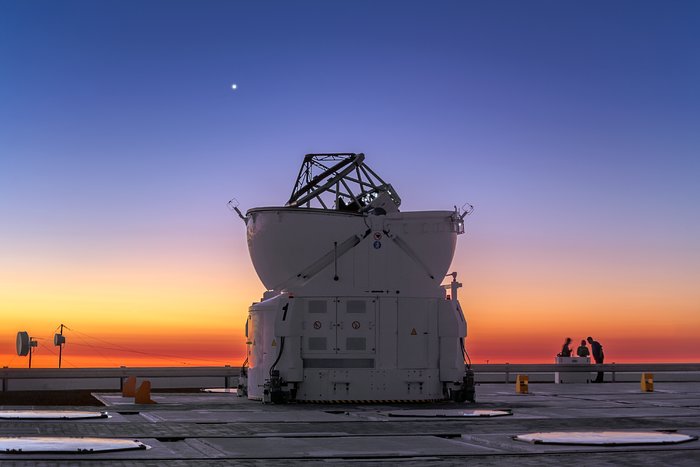 This image, taken by ESO Photo Ambassador Petr Horálek, shows the planet Venus shining brightly over ESO’s Paranal Observatory in Chile at twilight. The featured telescope is the Very Large Telescope’s Auxiliary Telescope 1, open and preparing itself to observe the night sky, which is splashed in shades of blue and orange.

ESO’s Very Large Telescope (VLT) comprises four 8.2-metre Unit Telescopes, and four 1.8-metre Auxiliary Telescopes (ATs) — like the one posing in the foreground of the image — whose captured light can be combined to form the VLT Interferometer (VLTI). By combining the light from multiple telescopes positioned in different places across the observatory site, the VLTI allows astronomers to see details up to 25 times finer than with the individual telescopes.

The light beams are then combined using a complex system of mirrors in underground tunnels where the light paths must be kept equal to distances less than 1/1000 mm over a hundred metres. This unbelievable technology means the VLTI can reconstruct images with an angular resolution of milliarcseconds — equivalent to distinguishing the two headlights of a car at the distance of the Moon.