An emerald in the sky 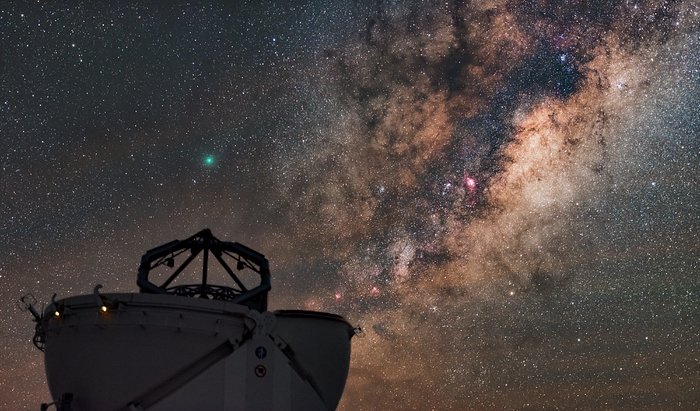 This Auxiliary Telescope at the Very Large Telescope (VLT), located at the Paranal Observatory in Chile, looks to be pointing at the greenish emerald glow of the comet 252P/LINEAR high above it.

Discovered in April 2000, 252P/LINEAR is a relative newcomer to the inner Solar System, traveling between the orbit of Jupiter and the orbit of Earth. A couple of days ago, in March 2016, it passed particularly close to the Earth, at a distance of only 5.2 millions kilometers, ranking as the fifth closest recorded passage of a comet. It can still be admired in the southern hemisphere. The green colour arises from fluorescing carbon-based gas surrounding the comet.

This gem of a picture was taken by the ESO Photo Ambassador Babak A. Tafreshi. He has just started out on ESO’s Fulldome Expedition, during which he will be taking more spectacular pictures from ESO’s observatories and of the southern hemisphere night sky.