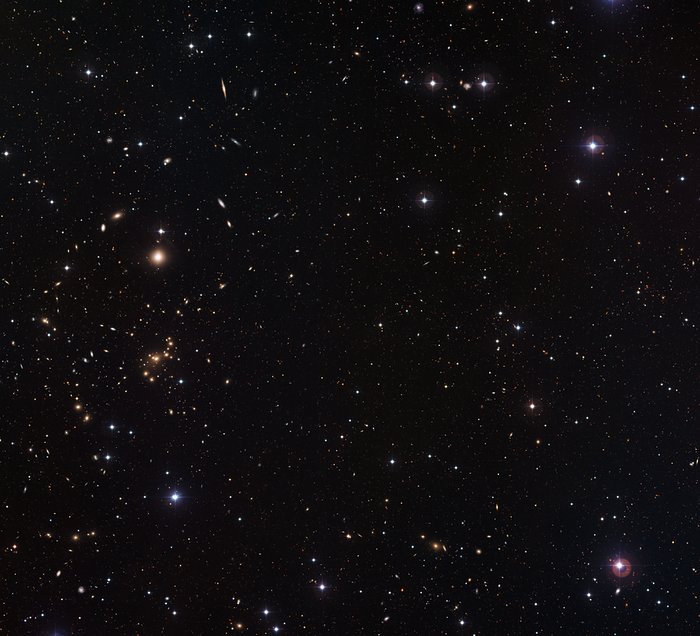 A multitude of faint galaxies, small luminous dots scattered over the dark sky, was captured by the Wide Field Imager on the MPG/ESO 2.2-metre telescope at the La Silla Observatory in Chile. Images such as this one are powerful tools to understand how dark matter is distributed in galaxies.

The picture is part of the COMBO-17 survey (Classifying Objects by Medium-Band Observations in 17 Filters), a project dedicated to recording detailed images of small patches of the sky through filters of 17 different colours. The area covered in this image is only about the size of the full Moon, but thousands of galaxies can be identified just within this small region.

The image was taken with an exposure time of almost seven hours, which allowed the camera to capture the light from very faint and distant objects, as well as those that are closer to us. Galaxies with clear and regular structures, such as the spiral specimen viewed edge-on near the upper left corner, are only up to a few billion light-years away. The fainter, fuzzier objects are so far away that it has taken nine or ten billion years for their light to reach us.

The COMBO-17 survey is a powerful tool for studying the distribution of dark matter in galaxies. Dark matter is a mysterious substance that does not emit or absorb light and can only be detected by its gravitational pull on other objects. Some of the closer galaxies pictured act as lenses that distort the light coming from more distant galaxies placed along the same line of sight. By measuring this distortion, an effect known as gravitational lensing, astronomers are able to understand how dark matter is distributed in the objects that act as lenses.

The distortion is weak and, therefore, almost imperceptible to the human eye. However, because surveying the sky with 17 filters allows extremely precise distance measurements, it is possible to determine if two galaxies that appear to lie close to each other are actually at very different distances from the Earth. After identifying the galactic lensing systems, the distortion can be measured by averaging over thousands of galaxies. With more than 4000 galactic lenses identified, this COMBO-17 survey is an ideal method to help astronomers to understand the dark matter better.

This image was taken with three of the 17 filters from the project: B (blue), V (green), and R (red). Data through an additional near-infrared filter was also used.