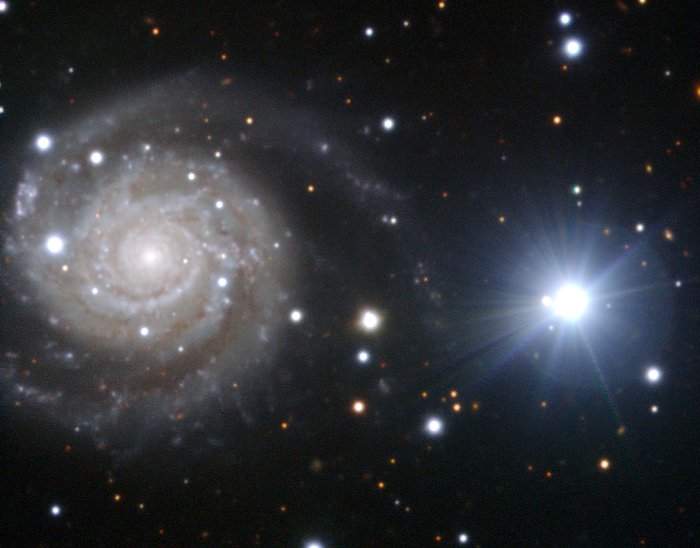 This new image of the spiral galaxy NGC 3244 was taken with the help of the President of the Czech Republic, Václav Klaus, during his visit to ESO’s Paranal Observatory [1], on the night of 6 April 2011. The Czech Republic joined ESO in 2007, and this was the first visit of the country’s President to an ESO site.

This galaxy has attracted considerable interest from astronomers over the past nine months, thanks to the violent death of one of its stars, which was discovered on 27 June 2010. This supernova explosion, now known as Supernova 2010ev (SN 2010ev), is still visible as the — now faint — blue dot nestled within one of the thick spiral arms just to the left of the galaxy’s nucleus.

To the right of  the galaxy, an unremarkable foreground star in our own Milky Way, TYC 7713-527-1, shines brightly enough to catch our attention. Although the star seems a great deal brighter than SN 2010ev, this is actually an illusion created by the large difference in the distances of the two objects. The galaxy is much further away, at a distance of about 90 million light years, while the star lies thousands of times closer, within our own galaxy.

At its brightest, SN 2010ev reached an apparent magnitude of about 14, making it about 1000 times dimmer than the naked eye can see, but it was still the third brightest supernova observed in 2010. In fact, if the supernova had been as close to Earth as TYC 7713-527-1, it would have been easily visible to the naked eye, unlike the aforementioned star.

The image was taken using the FORS2 instrument on the ESO Very Large Telescope (VLT). The filters used for the image were B, V and R, which were coloured blue, green and red respectively. A framed print of the President’s Galaxy has been presented to Václav Klaus, as a memento of his visit to Paranal.

[1] For more information about the visit of the President of the Czech Republic, Václav Klaus, see the organisation release