The FORS Team at Paranal has concluded the first phase of the extensive FORS1 commissioning tests at the first 8.2-m VLT Unit Telescope (UT1), successfully and according to the plan. Although this work was primarily aimed at testing the technical performance of this new instrument, it has also been possible to obtain some spectacular images already at this early stage. And now, for the first time, spectra [1] have also been observed with the VLT.

After three weeks of intense work, the FORS team reports that FORS1 has now been trimmed to a very high level of performance. A large amount of test data was obtained in all FORS1 observing modes. They include direct images through various optical filtres of star fields, galactic nebulae, galaxies, galaxy clusters, gravitational arcs as well as spectroscopic and also spectro-polarimetric observations of single and multiple objects. Towards the end, the work concentrated on streamlining certain functions of the control software in order to make observations safe and easy to perform, thereby further optimizing the use of the telescope time.

The purpose of this Commission Phase 1 was first of all to get the instrument on-line and to prove that all observing modes work correctly. This goal was fully achieved and mostly involved observations of comparatively bright objects although, already now, a spectrum of a 25-magnitude galaxy proved to be no problem. Later, during Commission Phase 2 and especially the subsequent FORS Science Verification programme, observations will also be made of extremely faint objects at the limit of what is possible with FORS1.

The FORS team is now on its way back to Europe, elated but also quite exhausted after one month of continuous hard work, from the initial installation of the instrument to the final checks during this commissioning phase.

The following pictures are based on test observations done during the commissioning period now terminated. Full details about the exposures are given below as "Technical Information".

The Dumbbell Nebula - also known as Messier 27 or NGC 6853 - is a typical planetary nebula and is located in the constellation Vulpecula (The Fox). The distance is rather uncertain, but is believed to be around 1200 light-years. It was first described by the French astronomer and comet hunter Charles Messier who found it in 1764 and included it as no. 27 in his famous list of extended sky objects [2].

Despite its class, the Dumbbell Nebula has nothing to do with planets. It consists of very rarified gas that has been ejected from the hot central star (well visible on this photo), now in one of the last evolutionary stages. The gas atoms in the nebula are excited (heated) by the intense ultraviolet radiation from this star and emit strongly at specific wavelengths.

eso9846a is the beautiful by-product of a technical test of some FORS1 narrow-band optical interference filtres. They only allow light in a small wavelength range to pass and are used to isolate emissions from particular atoms and ions. eso9846b is an enlargment that shows well the intricate structure in the central part of the nebula.

In this three-colour composite, a short exposure was first made through a wide-band filtre registering blue light from the nebula. It was then combined with exposures through two interference filtres in the light of double-ionized oxygen atoms and atomic hydrogen. They were colour-coded as "blue", "green" and "red", respectively, and then combined to produce this picture that shows the structure of the nebula in "approximately true" colours.

One of the main features of the FORS instruments is their ability to do multi-object spectroscopy (MOS), i.e., to obtain spectra of several objects at the same time. Many conventional spectrographs in use at telescopes around the world are only capable of observing one spectrum at a time. This necessitates a large amount of precious observing time when spectra of several stars or galaxies shall be observed, e.g., for comparison, or when searching for objets with unusual physical properties.

FORS1 and FORS2 are designed in such a way that they can register spectra of up to 19 astronomical objects simultaneously. Moreover, they can change from one set of objects to the next within seconds. This greatly increases the observing efficiency and ensures that valuable data can be obtained much faster. That is particularly useful during especially excellent, but relatively rare observing conditions.

The MOS mode of FORS1 is here illustrated by example of spectra of stars in the open cluster NGC 330 in the Small Magellanic Cloud (SMC) . The SMC is a companion galaxy of our Milky Way galaxy at a distance of about 150,000 light-years. It is seen deep down in the southern sky and will be a main object of future studies with the VLT.

Sophisticated software was written by the FORS consortium that allows interactive allocation of target objects in the sky field to the individual slits of the multi-object spectroscopy unit (MOS) of FORS1. The dispersing element that separates the incoming light into different wavelengths (colours) is a grism (a glass prism with a ruled grating replicated onto a thin resin layer on one of the prism surfaces). FORS1 has different grisms that produce spectra with different spectral resolutions. This allows a wide range of projects to be carried out, from quite detailed spectra of brighter objects, to low-resolution spectra of very faint objects, e.g., extremely distant galaxies.

eso9846c shows a direct image of the entire sky field (square and outlined by a blue line) with 19 horizontal strips that define the allowed areas for each of the 19 vertical slits. The positions of the slits that were chosen for this exposure are also indicated by vertical double lines.

eso9846d shows the recorded spectra of the stars in this cluster that were selected for this observation. They appear as bright lines spanning the full field in horizontal direction. Spectrum no. 4 from the top (of star "Be41") is indicated. The shorter, bright vertical lines are spectral emission lines originating in the terrestrial atmosphere (air glow); they show the extent of the individual slits. Note that in some slits, more than one star spectrum has been registered, thus further increasing the observing efficiency.

The FORS1 MOS spectrum was taken for technical reasons, in order to verify the accuracy with which the positions of the individual MOS slits can be set. Therefore, fairly bright stellar objects (down to about 19th magnitude) and a comparatively short exposure time were used. However, already on such "technical" spectra, it will be possible to perform very useful science, as explained below.

NGC 330 is an extraordinary, young open star cluster. It is famous because it is extremely metal poor, even more than its surroundings in the Small Magellanic Cloud. It furthermore contains unusually many Be stars . In fact, no less than about 70% of its B stars belong to this peculiar variety, compared to about 10% in star clusters of our own Milky Way Galaxy. Be stars are fairly young and hot (~30,000 K) and rotate comparatively fast. Their spectra show broad emission lines of hydrogen from a rotating circumstellar disk. The reason for the overabundance of Be stars in NGC 330 is not known with certainty; the reason may be the very low content of heavy elements.

Until now, the fainter Be stars in NGC 330 have only been identified by means of photometric observations of their colours. Now, however, the FORS Team was able to obtain the first spectra of some of these stars and confirm the presence of emission lines. eso9846e displays the tracing (brightness vrs. wavelength) of the spectrum of star "Be41" in NGC 330. It is of magnitude 17 and the spectrum isa the fourth from the top in eso9846d. In addition to broad absorption lines of hydrogen and helium (a doppler effect of the rapid rotation), there is a sharp H-beta emission peak from hydrogen near the center of the spectrum, thus confirming it as a Be star . Note that this emission line can also be seen as a bright spot in spectrum no. 4 in eso9846d.

[1] A spectrum is the dispersion of light from an object into the colours of the rainbow. Spectroscopy is a key technique in astronomy: From a spectrum, it is possible to deduce important information about the object emitting the light, e.g. its chemical composition, surface temperature and the direction and speed of its motion (relative to us). This is especially important in the investigation of very distant objects as it allows the determination of their distance due to the expansion of the universe. This will be one of the main domains of the work with FORS.

[2] More information about this impressive object is available on the web at various locations, e.g., http://messier.seds.org/m/m027.html.

This is the caption to ESO PR Photos 38a-e/98 . They may be reproduced, if credit is given to the European Southern Observatory.

This text will also be available in German at the web sites of the Heidelberg State Observatory and the University Observatories of Goettingen and Munich. 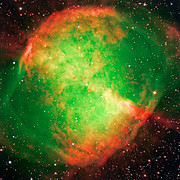 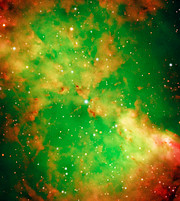 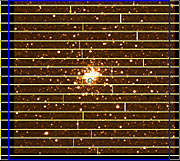 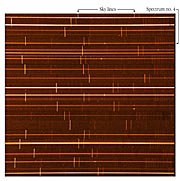 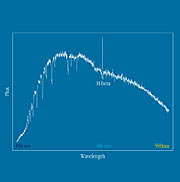