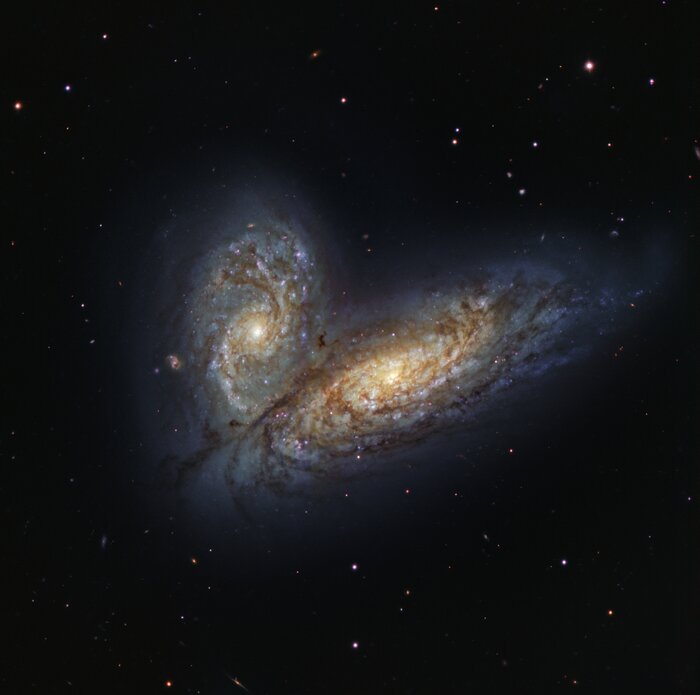 Around 60 million light-years away, in the constellation Virgo, the two galaxies NGC4567 and NGC4568, nicknamed the Butterfly Galaxies due to their wing-like structure, are beginning to collide and merge into each other. This is depicted in this picture captured by the FOcal Reducer and low dispersion Spectrograph 2 (FORS2) instrument, which is mounted on ESO’s Very Large Telescope (VLT) at the Paranal Observatory in the Chilean Andes.

Galaxy collisions are not unusual in the Universe. We may imagine them to be violent and catastrophic, but in reality they are surprisingly peaceful, like a waltz performed by stars, gas and dust, choreographed by gravity. This kind of collision and merger is also thought to be the eventual fate of the Milky Way, which scientists believe will undergo a similar interaction with our neighbouring galaxy Andromeda.

FORS2 is often nicknamed Paranal’s “Swiss Army knife” for its incredible versatility, and it’s in fact one of our most demanded instruments. Besides capturing images like this one it can also take spectra of up to several tens of cosmic objects simultaneously, or study polarised light.