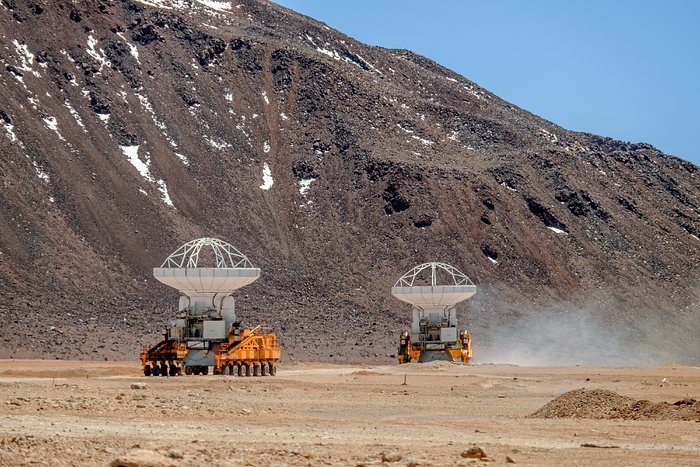 Many telescopes are formed of multiple mirrors or antennas, not just one. ESO’s Very Large Telescope (VLT), located at ESO’s Paranal Observatory in Chile, is a prime example. The VLT comprises four main telescopes, and four smaller, movable auxiliary telescopes — eight individual structures in total. However, even this is dwarfed by the Atacama Large Millimeter/submillimeter Array (ALMA), which sits atop the Chajnantor plateau in the Chilean Andes — and comprises a whopping 66 antennas!

Even individually, the ALMA antennas are impressive in size. The Chajnantor plateau itself is also located at an altitude of 5000 metres, with its Operations Support Facility (OSF) at a (still considerable) altitude of 2900 metres. As the antennas are not built up on the plateau, this required an entirely new approach to transporting each of the constituent antennas from the OSF up to Chajnantor. Enter Otto and Lore!

Designed and built especially for the job, Otto and Lore are the names of the two ALMA Transporters — the two yellow vehicles pictured here. The duo possess impressive features; at 20 metres long, 10 metres wide and with 28 wheels each, these machines are built not just to  survive in the harsh environment of the Atacama Desert, but to thrive in it! While rugged and powerful, they also possess a delicate touch, and are able to position each antenna with astonishing millimetre accuracy.