One picture, many stories 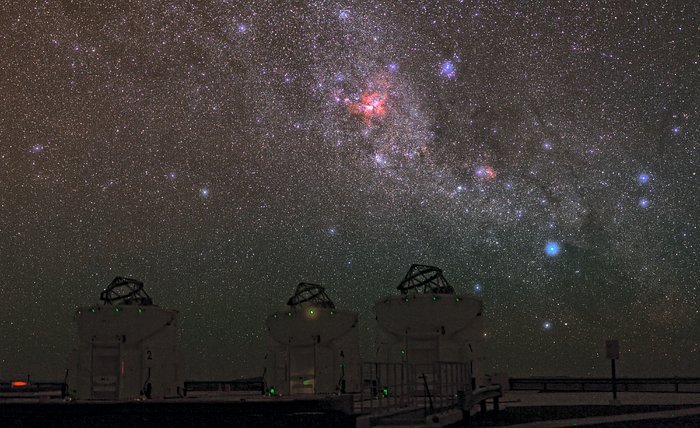 ESO Photo Ambassador, Babak Tafreshi has captured an outstanding image of the sky over ESO’s Paranal Observatory, with a treasury of deep-sky objects.

Below the Carina Nebula, we see the Wishing Well Cluster (NGC 3532). This open cluster of young stars was named because, through a telescope’s eyepiece, it looks like a handful of silver coins twinkling at the bottom of a wishing well. Further to the right, we find the Lambda Centauri Nebula (IC 2944), a cloud of glowing hydrogen and newborn stars which is sometimes nicknamed the Running Chicken Nebula, from a bird-like shape that some people see in its brightest region (see eso1135). Above this nebula and slightly to the left we find the Southern Pleiades (IC 2632), an open cluster of stars that is similar to its more familiar northern namesake.

In the foreground, we see three of the four Auxiliary Telescopes (ATs) of the Very Large Telescope Interferometer (VLTI). Using the VLTI, the ATs — or the VLT’s 8.2-metre Unit Telescopes — can be used together as a single giant telescope which can see finer details than would be possible with the individual telescopes. The VLTI has been used for a broad range of research including the study of circumstellar discs around young stellar objects and of active galactic nuclei, one of the most energetic and mysterious phenomena in the Universe.