Behind the scenes at ESO: Showing you the road to the stars
What you’ll discover in this blog post:
The Universe is absolutely teeming with stars — at least 100 billion populate our Milky Way galaxy alone. Yet because most stars are very far away, it’s incredibly hard for astronomers to observe them as anything more than just points of light. But thanks to a clever method involving transiting exoplanets, astronomers might have found a solution that allows us to actually see what’s happening on stellar surfaces. We’ve asked Dainis Dravins of Lund University in Sweden for the details.

Q: Dainis, tell us more about the surfaces of stars and what motivated your team to develop a new method to study these surfaces.

A: Stars are not smooth spheres; rather their surfaces are violent boiling oceans of glowing gas. Most of what we know about the Universe relies on light emitted from these very surfaces, and precise studies of stars and their planets require us to understand this starlight. It’s now possible to compute models of such boiling stellar surfaces. While solar models are checked by comparing them to structures we observe on the Sun, this isn’t really an option for distant stars, because they’re only visible as specs of light. But if we can’t test these models, how can we know if they’re correct? So together with a team of astronomers from Sweden and Germany, we developed what at first seemed a far-fetched idea: a technique by which we can see the structures on the surfaces of nearby stars using transiting exoplanets.

Q: How can exoplanets help us look at stars? Is it not the other way round: stars help us to discover and characterise exoplanets?!

A: True. Exoplanets are planets orbiting other stars, but they’re trillions of kilometres away and their light is extremely faint compared to their parent stars, so we’ve had to come up with clever ways to detect and study them. One method is called transit photometry, which is when a planet passes in front of its parent star and blocks a fraction of the light, causing the star to dim slightly. It’s similar to what happens during a solar eclipse as seen on Earth. If the dimming lasts for a fixed interval of time and is repeated periodically, that tells us a planet is orbiting the star.

Here’s how it works: imagine a distant skyscraper at night with hundreds of illuminated windows in various colours. From far away, we only see the whole building as one unresolved blob of light. Now, suppose a hot-air balloon floats between us and this building. As it slowly moves across, the balloon gradually hides the light from some windows, uncovering light from others. We can now measure the light and colour from this distant building and watch it change as the balloon slowly drifts by. These gradual changes in brightness and colour allow us to figure out the light patterns of the skyscraper windows, determine what fraction of them are lit up, and whether all of them are the same colour or not.

In the same way, an exoplanet that happens to be seen transiting across the disc of its parent star gradually covers part of the star’s surface and blocks the light from behind. By watching the changes in brightness and in colour (the latter in the form of spectra), we can deduce the properties of the fine structure on stellar surfaces. Then, we can compare these deductions to 3D models we’ve made of the stellar surface, and make synthesised images and videos of stellar structures and the movements of the surface.

This graph from one of the papers shows changes in iron spectral lines at different locations and moments during the transit of exoplanet HD 209458 b. It’s packed with information needed to infer small details of far-away star surfaces.
Credit: D. Dravins

Q: Tell us about how you made your observations.

A: We carried out our project by diving into ESO’s rich data archive and using observations made by other astronomers in the past, for a different scientific purpose. Researchers like us can reuse data for new applications that weren’t known or foreseen when the original observations were made, so the data archives are kind of like a broadly-available virtual observatory!

Q: What were you doing to come up with the idea to use exoplanet data to study stellar surfaces?

Actually, as is the case with a lot of research, it started from a somewhat different angle. Several years ago, I prepared some ideas for future observations with ESO’s Extremely Large Telescope. One conceptual observing proposal would be to begin resolving the surfaces of nearby giant or supergiant stars using the ELT’s advanced technology. Exploring the details of this and similar concepts, it suddenly became clear that one would not have to wait for the ELT since exoplanets could be used as probes to study the surfaces of at least smaller stars, such as the Sun.

The interest in such an ELT project remains undiminished, however, since it concerns giant stars, which cannot be probed by the current exoplanet technique. Since any planet covers only a tiny fraction of any giant star, the signal would be much too small to measure precisely.

Q: What applications does this technique have for studies of stars and exoplanets? What could it help us discover?

A: After developing this technique, we demonstrated its application to a well-known star called HD 209458. This star is host to the exoplanet HD 209458 b, nicknamed Osiris, which is an exoplanet of firsts for many observations — it was the first exoplanet discovered transiting its star, the first with a detected atmosphere, and the first exoplanet found to contain oxygen and carbon in its atmosphere. By watching this planet as it transited across its star, we obtained high-resolution spectra of small areas of the star’s surface.

But this technique could take us even further, perhaps helping us find Earth-like planets. So far, no truly Earth-like planet has been found — i.e., a planet with a size comparable to ours, moving around a Sun-like star with a period of about one year. To find a planet like this is a major challenge because we’d have to identify very tiny changes in the light of the host star, which is difficult because the turbulent surface of a star causes its starlight to fluctuate much more than the minuscule effects caused by a planet. But we can get around this. By developing and testing more precise models for stellar surfaces, we might be able to separate the signatures caused by a planet from the effects caused by the star, allowing us to find Earth’s siblings. Our current project is one possible route towards this exciting goal.

This model simulates the surface structures (granular convection) on a star similar the Sun. This is a 2D view of the stellar surface from above. At the top right is the scale and time. The scale is measured in 5000km while time is measured in seconds.
Credit: H. G. Ludwig
Stars will now become more real to us once we see their irregularities, the magnetic or thermal spots on their surfaces, and their distorted shapes from their rapid rotation

Q: What are the limitations of this technique? Can it be improved?

A: Our method appears straightforward in principle, but it demands very precise measurements. To work, it requires a bright star with a large exoplanet transiting in front of it. Faint stars can’t be measured precisely enough, and if the planet is tiny then its effect on the starlight will be small and so our measurements will be uncertain. Fortunately, many projects are underway to search for various types of suitably bright targets, including the newly operating MASCARA exoplanet hunter at ESO’s La Silla Observatory!

Q: Are you excited for the future of this technique?

A: Of course I have to say that, but I am actually very excited. Not long ago, the moons of the outer planets in our Solar System were just mere point sources of light — and now we know they are a plethora of different worlds. And imagine what a meager state extragalactic astronomy would be in if we only observed galaxies as pinpricks of light instead of rich and complex neighbourhoods of stars.

These techniques start to reveal new worlds. Stars will now become more real to us once we see their irregularities, the magnetic or thermal spots on their surfaces, and their distorted shapes from their rapid rotation. Tantalising results have already been obtained with facilities like the VLTI interferometer but now we can start to examine stellar surfaces in greater detail. 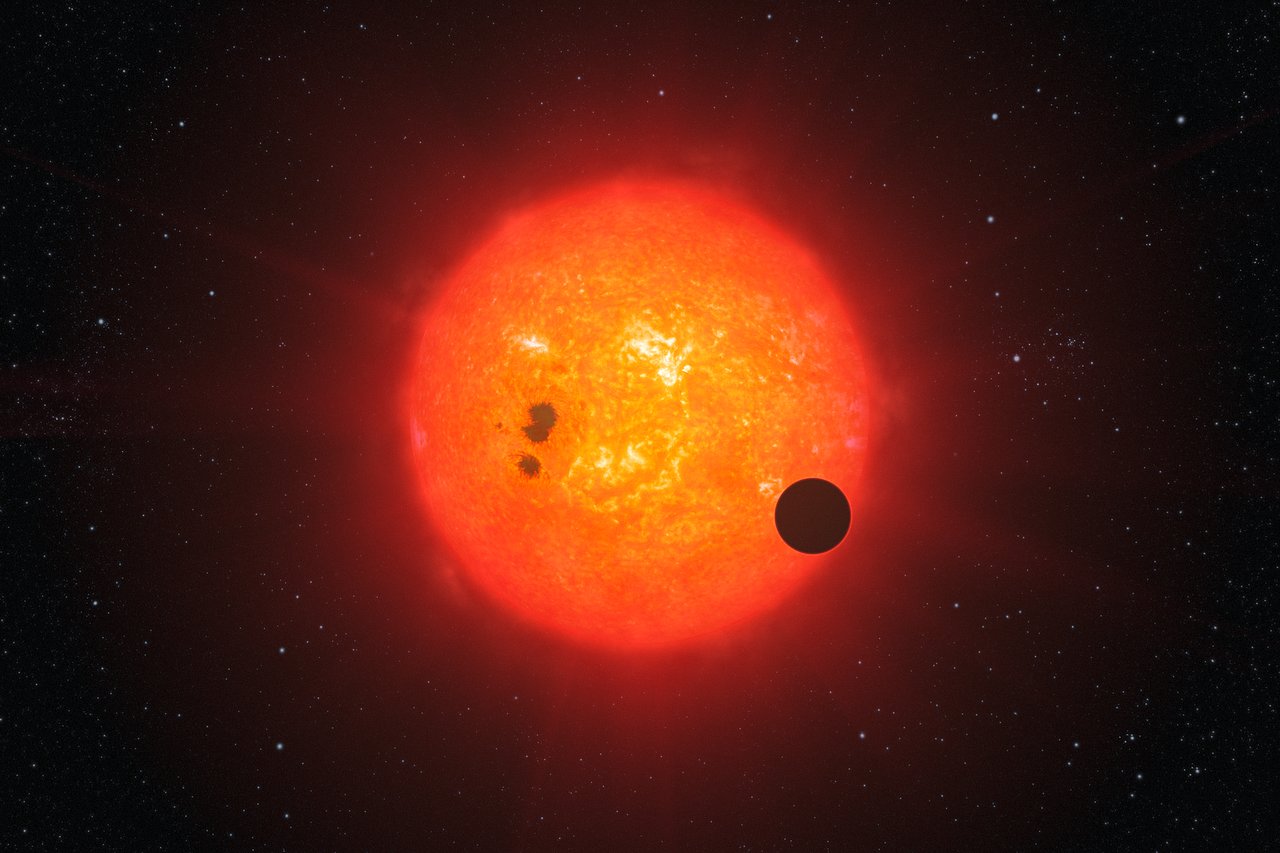 Artist’s impression showing how a transit of a super-Earth orbiting the nearby star GJ1214 may look
Credit: ESO/L. Calçada

Dainis Dravins is an astronomer and senior professor at the Lund Observatory in Sweden. His recent research has focused on effects of atmospheric distortion, stellar activity, and radial velocity. Email: dainis@astro.lu.se